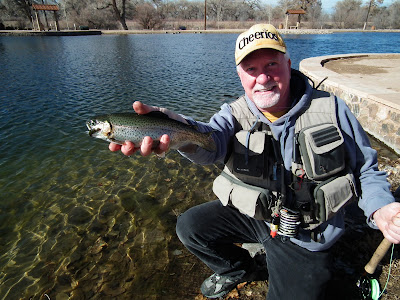 By Karl Moffatt
If the dead of winter makes you stir crazy then there may be no better escape than a quick trip to New Mexico’s fanciest fishing hole.

“They’ve done an excellent job out here, “says Joyce Maldonado, 44, of Albuquerque who recently visited the lakes for the first time at her husband’s urging.”It’s really beautiful, the facilities are wonderful and the restrooms are even heated.”
Anglers itching to get out for the day will find the park within easy reach of Santa Fe and Albuquerque and good winter trout fishing due to a generous stocking program and the lakes high tech underpinnings.

Oxygen diffusers are installed in each of the dredged, deepened and lined ponds to provide fish a quality environment in which to reside.

The park also features a state of the art holding facility where fish can be temporarily stored while awaiting stocking.

Trout are stocked for winter and spring fishing while catfish replace them during the heat of the summer and fall.

The park features three lakes including the recently opened catch and release pond where fishing for trophy trout on the fly can be had under a winter special for just $10 a day.
The use of single, barbless, lures or flies is required on the catch and release pond but tandem flies rigs are permitted. All fish must be netted when caught and kept in the water while unhooked.

A state fishing license is not needed at the angling park owned and operated by Sandia Pueblo.
During a recent visit on a warm, sunny, winter’s day, the fishing proved productive and fun while the views of the surrounding Bosque and the Sandia Mountains made passing the time between strikes, relaxing and enjoyable.

Snow geese and ducks provided occasional entertainment while the eerie cries of an unseen group of wintering cranes drifted over from a nearby pasture. An Amtrak train added to the atmosphere when it zipped by on the nearby railroad tracks and left the lonely wail of its horn trailing in its wake.
Park Manager, Michael Bridges, 54, of Albuquerque, says the catch and release pond is part of the park’s private, pavilion area which can be rented for graduation parties, family reunions, company picnics and even weddings.

The pavilion features a spacious, covered patio with seating, an attached, fully equipped commercial kitchen, gas fired BBQ grills and a nearby playground and restrooms.

Bridges, who holds a bachelors degree in biology and economics from UNM (University of New Mexico) and a master’s degree in organizational management from the University of Phoenix, has previously worked for outdoor recreational giants such as REI and Sportsman’s Warehouse.

Bridges says he loves his new job working with Sandia Pueblo and with a sweep of his arm noted how the work environment couldn’t be beat either.

Those seeking to fill their freezer will find two more lakes south of the pavilion area where bait can be used to catch and keep a total of five fish per day at $20, four for seniors who pay $15 and three fish for kids under 12-years-old who are charged $12 for the day.

These two lakes cover about 18 acres and are surrounded by towering cottonwood trees and a loop walking trail. Visitors pay just $3 to hang out without fishing.

On the interconnected lakes anglers with find amenities such as some 51 sun shelters, convenient parking areas and numerous clean, heated and well equipped restrooms.
The lakes also feature several handicapped accessible fishing stations as well as a fully stocked bait and tackle shop that sells gear, beer and snacks by friendly, helpful clerks.

There’s even a fish cleaning station for the customers’ convenience.

Overall the lakes at Sandia Pueblo may very well have set the bar for tribal operated fishing parks with its remodel of this old, favorite, winter fishing hole. See their website at http://www.sandiapueblo.nsn.us/indexlakes.html for more info.

From Santa Fe take I-25 south to the Tramway exit and head west to towards the river and at the traffic circle take State Road 313 back north towards Bernalillo. Sandia lakes will be on the left shortly.
For a more scenic drive home, stay on 313 through the town of Bernalillo, past Santa Ana Pueblo and on to San Felipe Pueblo. Stay on the road as it winds through the pueblo until it meets and intersection just past the playing fields and then head east back to the interstate. The more adventurous can go straight at this intersection and follow the dirt road all the way to Santo Domingo Pueblo (now known as Kewa Pueblo) and then head east back to the interstate.
2 comments: 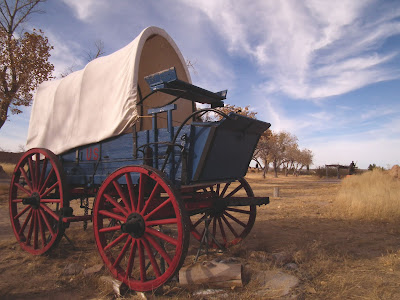 By Karl Moffatt
As the temps begin to dip and the snow gets to flying around northern New Mexico, it’s time to head south to warmer climes where one can visit other state attractions like historic Fort Selden while camping out at nearby Leasburg State Park.

Fort Selden, just outside of Las Cruces on the back road to the chile capital of Hatch, provides visitors a glimpse of the past when black Buffalo soldiers were stationed at the adobe fort and patrolled the surrounding countryside to keep marauding Indians at bay.

The out-of-the-way state monument and museum is at the heart of some very interesting country along the Rio Grande where t-shirt weather is routine during winter months. 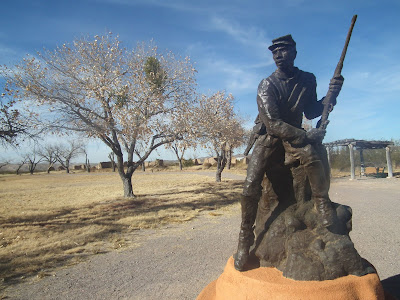 Visitors will find displays inside the monument’s small museum depicting life on the frontier during the late 1800s when settlers risked their lives in any number of ways in the harsh, desert environment.

Fort Selden was home to the 125th Colored Infantry Regiment made up of black soldiers who joined the U.S. Army near the end of the Civil War and sent west.

The black soldiers’ fighting skills, tenacity and courage earned the respect of their Indian adversaries who called them “Buffalo Soldiers” in part because of their thick wooly hair, much like a bison’s.

The black soldiers performed so well that nine were awarded the Medal of Honor for their service in the territory of New Mexico.

Old photos, artifacts and other materials displayed within the museum give visitors a good idea what life was like at the remote fort and friendly staff are available to answer questions. 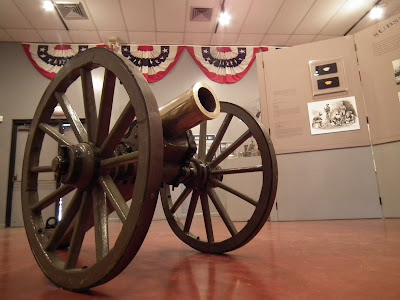 The famous WW II general, Douglas MacArthur, spent a couple of early childhood years at the fort because his father was stationed there. MacArthur would later write of learning to ride and shoot before he could read and write while growing up there.

The museum boasts an impressive weapons display, including large caliber muskets and rifles of the era, a 12-pound cannon and a mountain howitzer. There are also uniforms and other equipment to be seen along with documents and other interesting materials.

A walk through the spacious grounds outside of the museum reveals the remnants of the still-standing adobe walls under the shade of a line of aging cottonwood trees.

A bronze statute statue honoring the Buffalo Soldiers is prominently displayed on the grounds where every second Saturday of the month re-enactors occupy the grounds and demonstrate for visitors the daily life of soldiers then.

From the grounds one can gaze across the Rio Grande riverbed upon the imposing but barren Robledo Mountains where soldiers on Lookout Peak kept an eye out for bandits and ill-intentioned Indians.

Admission to the monument is free for New Mexico residents on Sunday and free to seniors on Wednesdays. 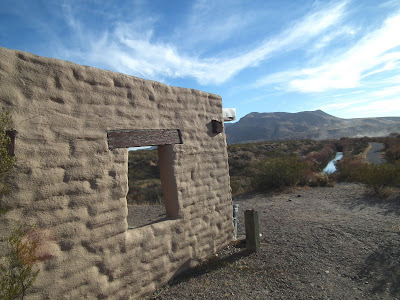 Camping is available at nearby at Leasburg Dam State Park, a quiet, hilltop desert oasis with numerous sites for tent and RV camping. There’s an overlook of the Rio Grande below where hikers can explore the dry, sandy, riverbed as the river’s flow is cut to a trickle during the winter months

A recent remodel of the park includes a new visitor center, restrooms with showers and a playground.

Park guests can easily hike to the nearby fort or take a quick ride over to one of New Mexico’s last remaining roadhouses, the Blue Moon Bar, just across the river on State Road 185.

The bar has a rich history one might discover while downing a cold one and chatting with the locals.

For instance during the early 1980s, local musician Jack Quaintance often performed at the bar and then would amble down to the river on cool summer evenings to serenade the women prisoners being housed at the old, Radium Springs resort near the state park.

The spa still stands as does the historic dam-keepers house at the park and visitors to the area will find much to see and do while soaking up warmth and sunshine found in New Mexico’s vast, southern region. 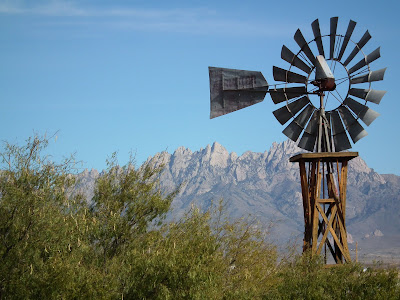 If You Go:
From Santa Fe take I-25 south to the Fort Selden/Radium Springs/Leasburg Dam State park exit and follow to the facilities. For a more interesting trip with side shows follow old Route 1 which runs parallel to the interstate, getting on at the San Antonio exit just south of Socorro and following through the Bosque Del Apache and past the Santa Fe Diner, a throwback to the truck stops of old. Continue on Rt. 1 past the El Camino Real International Heritage Center, another great little state monument, and on through Nogal Canyon back to the interstate at the Mitchell Point exit.
No comments: 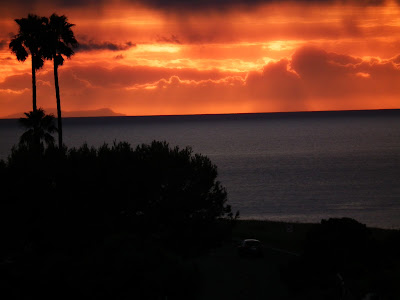 We got out of Santa Fe soon after the snow began to fly and just as a bitter cold front blew in.

We were headed for southern California where t-shirts, shorts and sandles could still be worn.

We stayed with friends just outside of Los Angeles and then took a mid-week cruise up the coast to spend a couple of nights in the tiny, hamlet of San Simeon.

It was a trip made all that much better since we bought our tickets during one of Southwest Airlines' sales and then got a very, reasonable rate on a mid-sized, rental car, from Enterprise.

And then along the way we got in a little surf fishing on a classic, warm, sunny, southern California day.