Villanueva State Park - A Charming, Secluded, Get Away. 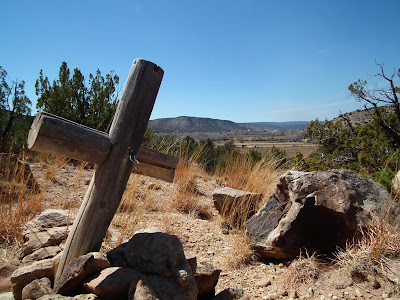 Gazing out from the overlook trail at Villanueva State Park one can see the Pecos River sparkling in the sunlight as it meanders through the scenic valley below.

It’s a short but steep climb to the top of the hill overlooking this tidy little state park, but the rewards are spectacular views of the surrounding mountains and countryside.

The state park located about 60 miles east of Santa Fe has long been a draw for locals but others are also finding their way down into this secluded, picturesque valley along the Pecos river.

During a recent mid-week visit a French tourist and a Wyoming retiree were found hiking along the park’s popular overlook trail while at the bank of the river a couple of locals cleaned a fish they’d caught.

There’s a reason Villanueva State Park has long been known as a locals park and that’s in part because it is, having been created back in 1967 with land donated by the San Miguel del Bado Land Grant Board of Trustees. 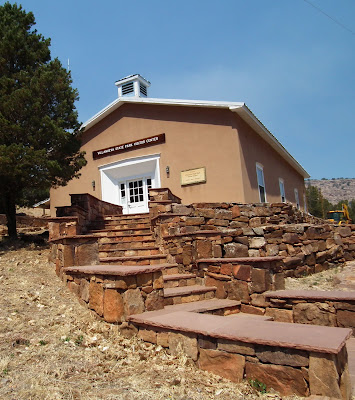 “This is the only state park I know of initially created by a land grant board of trustees,” says Malcolm Ebright, director of the Center for Land Grant Studies of Guadalupita in a 2009 report to the state regarding the park.

The report, found online at http://www.newmexicohistory.org/featured_projects/Legislative%20Reports/documents/Villanueva.pdf provides a fascinating historical perspective of how the park was born during a tumultuous time in the state’s land grant history.

The report notes that the land grant trustees not only transferred 67 acres including 4,800 feet of river front access to the park but that an additional 3.5 miles of the Pecos River flowing through the grant would be opened up to the public for fishing and other recreational purposes.

The nearby village of Villanueva where most of the land grant members lived at the time was expected to benefit from the increased commerce from those frequenting the park, the report notes.

Visitors to the village may want to drive up to the top of the hill overlooking the town to see the grotto containing santos and other religious items. The village boasts a beautiful church constructed of local rock back in 1830 and a stop at the village mercantile is a must for those who cherish local, mom and pop, stores.
The park is located just a few miles down the road from Villanueva and has proven to be very popular.

“The locals love it here on weekends and especially on Easter Sunday,” says Ramon Gallegos Jr. a 25-year State Park veteran and Villanueva’s Acting Manager. “But during mid week it’s peaceful and a great place to come relax and enjoy the scenery.”

Today the park spans about 1,600 acres with a pleasant campground featuring 33 sites, 12 of which provide electricity. There’s a bathhouse with showers and a modern playground for the kids to play in.

The river is regularly stocked from fall through spring and provides good fishing while swimming and wading becomes the favored activity during the summer months.

A visitor center with a classic adobe-colored stucco exterior and a small cupola on a metal roof features brochures, pamphlets and small informative displays inside.

Visitors will find numerous appealing campsites nestled among shade trees along the streamside while newly rehabilitated camping shelters atop a hill overlooking the lower campground are equally attractive to campers.
Hikers will find by crossing an attractive iron bridge spanning the river a 2.5 mile loop trail that heads up to the ravine overlooking the campground and river below.

Upon first heading upstream on the trail hikers will encounter a small butte jutting out over the river where the remains of rock walls can be seen. Native Indians and later Spanish settlers both apparently made good use of this spot and hikers can too.

Continuing on, the trail then switches back and begins a short but steep climb to the top of the overlook where visitors will find several rustic picnic shelters and an observation deck.

This is a superb spot to relax and enjoy a couple of cold beverages. Visitors need to pack out what they bring in and well-behaved, leashed pets are welcome.

Hikers can then continue their hike along the ridgeline and return to the bottom just downstream of the bridge.

Gallegos notes that the river is popular among kayakers and canoeists during years of ample spring runoff. One can take a day-long float through rugged, remote canyon lands covering about 19 miles to a take out at U.S. 84 at Tecolotito.

The river runs primarily through National Forest land starting a couple miles downstream of the state park and is reported to be a delightful float of relative ease with excellent fishing along the way.

Unfortunately the runoff forecast for this year is poor and it remains to be seen how good the river running will be. Equally disturbing is the fire threat this year which has forced parks such as Villanueva to prohibit open fires.

“We’re not allowing anything but propane right now,” Gallegos said.

In the meantime though with spring descending on the valley visitors will find the wildflowers in bloom, trees budding and the fishing biting at one of New Mexico’s more secluded get aways.
If You Go:

From Santa Fe take I-25 east towards Las Vegas and get off at exit 323 and follow St. Rd 3 to the outskirts of Villanueva. Note the sign at the intersection with County Road B 28 A which leads down to Villanueva State Park. Beer is available on the way at El Pueblo. Groceries and fishing supplies can be had at the General Store in Villanueva. A sit down meal can be had at the landmark La Risa Cafe in Ribera.
No comments:

It’s a Saturday morning and the sounds of kids playing drifts across Acomita Lake on a slight breeze.

Waves lap at the shoreline while the lonely wail of train’s horn sounds in the distance.

Mount Taylor looms on the horizon and the shoreline is busy with early spring anglers, despite the fact that Acomita Lake is one of New Mexico’s better kept, top secret, fishing holes.

“We used to come here years ago,” said Tim Davidson, 57, a school teacher out of Shiprock. “It’s my first time back since and it’s nice to be here again.”


Like many other tribal operators around the state, Acoma Pueblo’s Acomita Lake, is gearing up for an influx of stir crazy anglers looking for relief.

The lake had been closed for years while pueblo officials pondered what to do with an aging dam, declining irrigation use and other factors, says Ian Tator, 32, formerly of Lumberton, Director of Game and Fish for the pueblo.

Having reopened last year to rave reviews from serious anglers, one would be hard pressed to find any information about the lake online or in fishing reports.

But that’s changing this year with radio and billboard ads now appearing and web pages to be posted so interested anglers can find out more about this hot spot on the angling circuit.
Tator, a New Mexico State University graduate with degrees in wildlife and fisheries science, says the trout population in the lake is good since it was stocked several years ago but hadn’t been opened yet to fishing until last year.

The 75-acre lake is up to 45-feet deep in places and the trout population has held up well without experiencing any winter or summer die-offs due to extreme temperatures.
Nonetheless, it’s Tator’s hope that they will be able to purchase oxygen diffusers to help enrich the water and improve the fishery sometime in the near future. The lake holds mostly rainbow trout but brown and Snake River cutthroats trout are scheduled for stocking this year.
Tator says those using small boats and float tubes outfitted with battery-operated trolling motors have done well due to their ability to move about the lake to locate schools of fish. No boats over 20 feet long are allowed and gas motors are prohibited also.

Tator says typical flies such as wooley boogers and bead-head nymphs fished deep on sinking tip fly lines are working well while those fishing the bank with spinning lures, worms or power bait have had success too.

Tator recommends those who don’t mind wading should work the marshier, north end of the lake where many fish have been congregating.

“We strive for a nice clean environment here,” Tator says. “The fishing is excellent and it’s just a great place to get away from it all.”

Well behaved dogs, leashed or under voice command, are allowed while alcohol, guns and swimming are not. There is no handicap access as of yet.

The lake is open 7 a.m. to 7 p.m. Friday through Sunday and a limited supply of tackle, snacks and refreshments are available at the small store on site. 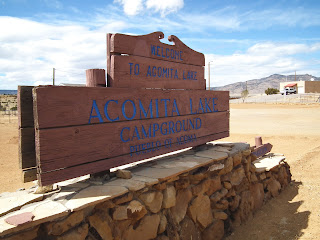 Tator noted that pueblo will host a fishing derby on Father’s Day in June with a top prize of $50,000 for the lucky angler who catches the tagged fish. Entry is $50 and there will be other prizes awarded for those who catch an additional 14 tagged fish, Tator said.

Those looking for tribal fishing a little closer to Santa Fe can head up to San Ildefonso Pueblo where a fabled, giant trout sporting a red plastic tag has still yet to be caught and cashed in for $200, says Ray Flores, Director of Parks and Wildlife for the Pueblo.
The fish is reported to be in the 25- to 27-inch range and was stocked with many other monster trout a couple of years ago, Flores says.

“People have caught him but nobody can seem to land him,” Flores says. “A kid just got him within six feet of the bank but then he broke him off.”

San Ildefonso’s friendly informal fishing pond sits amid the shade of the Bosque and is easily navigated by the handicapped and elderly, Flores says. Senior groups and school classes are welcome and can obtain steeply discounted rates, he says.

Fishing at San Ildefonso costs $12 for adults with a six-fish bag limit, kids, veterans and seniors pay just $6. The pond is open 8 a.m. to 6 p.m. weekdays and 6 a.m. to 6 p.m. on weekends. Well behaved leashed dogs are welcome.
And those in the mood for a little high country fishing need only head up to Nambe Lake and Falls where the heavily stocked waters, cool climate and expansive vistas make for an enjoyable day.

Adults pay $15 with a new limit of just five fish, down from seven in years past, says Joe Vigil, Chief Ranger.

“The costs of buying fish have gone up along with everything else,“ Vigil said.

Nambe Lake features good bank fishing and allows small boats with electric motors, float tubes and rafts. Well behaved dogs on leashes are welcome. Anglers will find some fishing supplies and a limited amount of groceries and ice at the ranger’s shed at the entrance to the lake.