Some teachers will be returning to the classroom this year and telling kids what they did this summer under a program designed to help bring nature into the classroom.

“This is great training,” Kelly Jolley, an alternative high school teacher at La Academia La Esperanza in Albuquerque said while learning to fish on the Rio Grande earlier this summer. “And I know that any time I can schedule an outdoor activity it improves attitude and attendance among my students.”

Jolley said she hopes to utilize the skills and materials she and 13 other teachers picked up during the training with the New Mexico Department of Game and Fish (NMDGF) Project Wild program in June.

The program provides hands-on training, educational guides and other materials to help teachers incorporate outdoor activities and concepts into their educational regime.

“Sixty percent of teachers who take our training will end up using these activities in the classroom,” says program administrator Kevin Holladay of NMDGF. “The bottom line is it’s all about getting kids back outdoors.”

Holladay says competition from electronic media, video games and other indoor activities can sometimes make getting kids outdoors to learn about our environment difficult.

But with help from teachers the Project Wild Program is designed to do just that.
The now nationwide program began over 30 years ago when a group of western state educators and natural resource administrators came together to promote outdoor education in the classroom.

Since then the program has trained over a million teachers in how to use its widely accepted learning guides and projects to stimulate an interest in the outdoors among students.

Here in New Mexico the project has trained about 4000 teachers and others since it began in 1984, Holladay says.

The project provides an extensive array of supplemental education materials to teachers as well as hands-on training.

For example, teachers can use one of the projects’ many coloring books to introduce younger kids to aquatic and other forms of wildlife.
Teachers might want to use the educational guides to have older high school students participate in a group environmental action project that benefits local wildlife.

There are many unique educational opportunities that can be employed in all grades covering all sorts of subjects including civic, math and other disciplines.

More info about the many educational projects contained in the program’s activity guides and other materials can be found at the NMDGF website at http://www.wildlife.state.nm.us/education/project_wild/project_wild.htm

In the meantime Industrial Arts Teacher, Charlie Harrison at Pojoaque Middle School says he plans on having his students build fence post bee hives and bat and bird boxes to help educate them about wildlife.

“I love nature and this program will absolutely help me share that with the kids,” he says.

Harrison was one of the teachers from around the state who enrolled in the Project Wild Training on the Rio Grande this summer where he and others took a raft trip and camped out for a night near Pilar.
During the trip the teachers learned about the river’s history and ecology from Steve Harris, Executive Director of Rio Grande Restoration and owner of Far Flung Adventures rafting company.

They also learned to fish from the NMDGF’s contract fishing instructor, Ti Piper, who last year alone conducted 23 fishing clinics and 37 presentations reaching close to 3,000 kids and adults.
Harrison listened carefully, worked patiently and then reeled in a small mouth bass he caught on a lure during the afternoon fishing session.

But it wasn’t all floating and fishing as the teachers had to sit down at camp and learn how to use Project Wild’s classroom instructional guides upon their return to the classroom.

Teachers interested in attending or holding their own Project Wild workshop can contact Kevin Holladay at (505) 476-8095 or by email at kevin.holladay@state.nm.us. 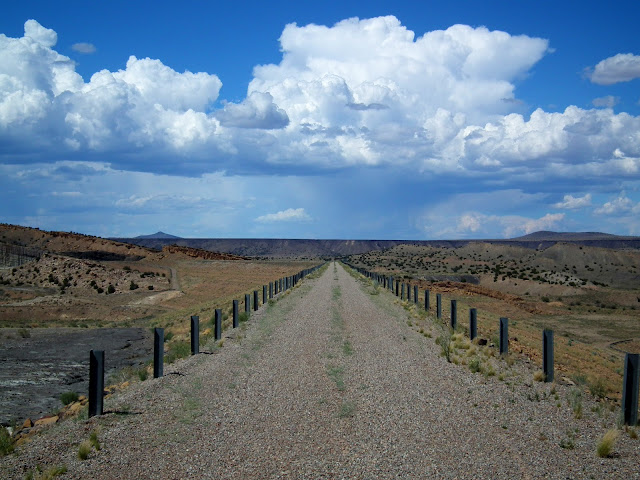 Need to get out of town fast and find some solitude and serenity?

Try Galisteo Dam just 30 minutes south of Santa Fe and about six miles east of the interstate at the bottom of La Bajada Hill.

The flood and sediment control dam located at the far end of a secluded, paved road features sweeping views of the Ortiz and Jemez Mountains and the back side of the Cerrillos Hills. 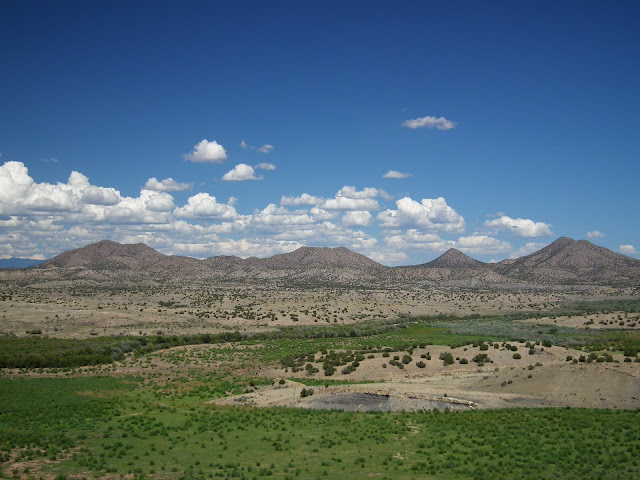 There’s no water here to draw typical recreational users which makes the dam site such an intriguing and unusual place to visit.

And although a big sign says “Stop” and “Road Closed” on the locked gate barring vehicle traffic to the dam’s overlook and picnic area, Becky Minor, manager at Cochiti Lake for the United States Army Corps of Engineers (USACE) says the facility is free and open to the public.

“It’s a nice quiet place with lots of solitude and great views of the mountains,” she says. 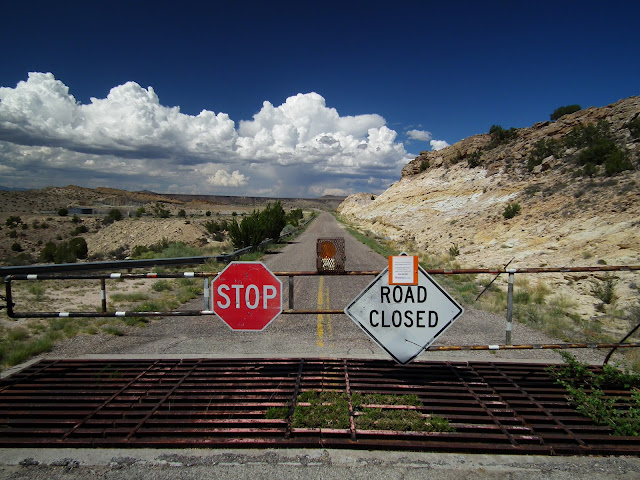 But vandalism at the remote site has been a problem which has resulted in increased security measures such as the locked gate, she said.

Visitors can park just outside the gate at a couple of roadside pull-outs and hike a short way into the overlook area or across the two mile wide dam.

Those who like to walk, perhaps with their dogs, might find the hike across the top of the lengthy, 160-foot high, earthen dam an enjoyable experience.

The six mile ride in to the dam site on NM 16 with little or no traffic to contend with might be a compelling reason for bicyclists to visit. 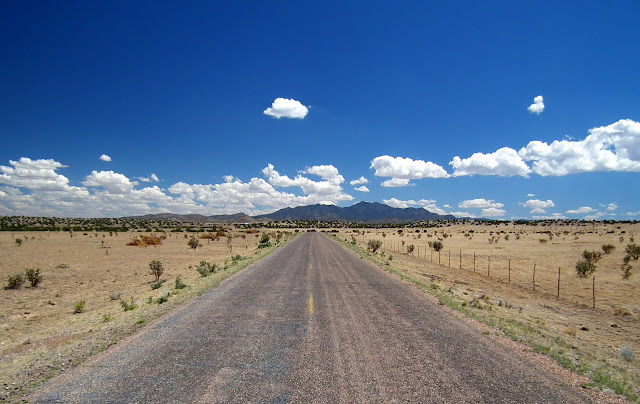 And weather watchers who enjoy the excitement of an afternoon thunder and lightning storm can, from the relative safety of the overlook bunker, easily observe one as it rolls across the expansive landscape below. 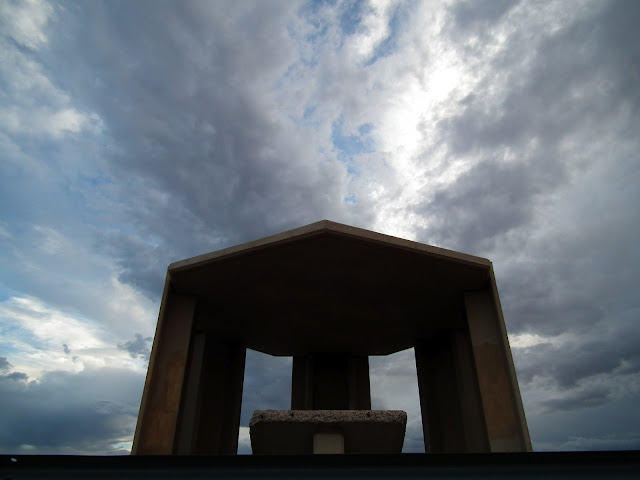 Visitors should keep in mind that the area is comprised of a patchwork of public, private and Indian lands, much of which is not conspicuously posted. Thus visitors should stick to the road and the immediate dam site.

Firearm use is strictly forbidden on Santo Domingo Pueblo lands which surround the dam.

The dam site itself sits on about 5 acres of land and features little more than the massive structure itself and some dilapidated picnic shelters at the overlook.

But visitors might be surprised to find that a remarkably clean, well equipped, modern vault toilet is available just inside the gated area. 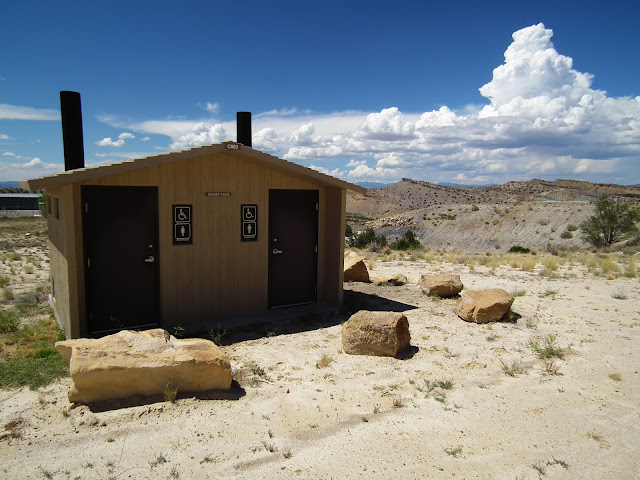 The dam was built in the late 1960’s as part of the Cochiti Lake flood control project for the Rio Grande, according to the 1985 historical account of the Army Corps of Engineers Albuquerque District by Author Michael Welsh.

The book provides fascinating reading for anyone interested in southwest water development as well as a historical accounting of many of New Mexico’s most prominent and storied political players.

The Cochiti project generated much public controversy during its planning phases which attracted the attention of then Santa Fe New Mexican editorial writer, Tony Hillerman, who referred to it as "immense monument to federal bureaucratic blindness" among other things, according to the book.

In the end though the Cochiti project went through and now provides great recreational opportunities to Albuquerque and Santa Fe area residents including fishing, boating, swimming and other outdoor activities.

An online PDF version of the book can be downloaded from the USACE’s digital library at http://cdm15141.contentdm.oclc.org/cdm/singleitem/collection/p16021coll4/id/137/rec/4 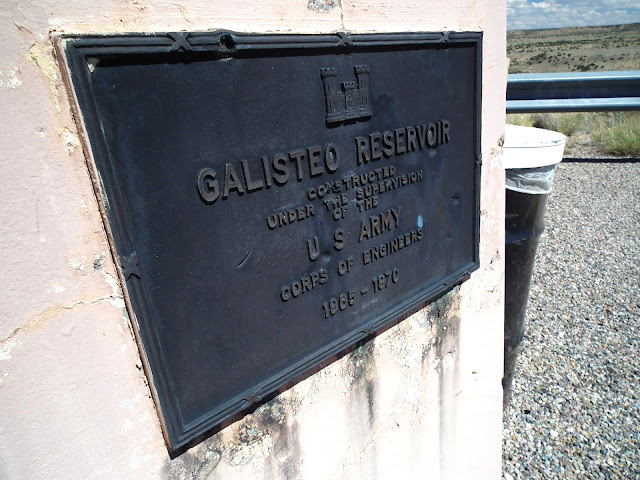 Galisteo Dam was built as part of the overall Cochiti project to limit damage that flooding in Galisteo Creek was doing to the Rio Grande floodplain.

Welsh’s book notes how flash floods in Galisteo Creek frequently swept away unsuspecting motorists late at night on portions of US 285.

The dam structure is designed to withhold sediment while allowing flood waters to gradually flow through the dam and wash downstream to the river.

And today it stands silently at the end of lonely dirt road far back in Indian country awaiting its chance to do just that.

In the meantime those seeking a change of pace from the usual outdoor recreational venues around Santa Fe might just want to venture south to this remote outpost. 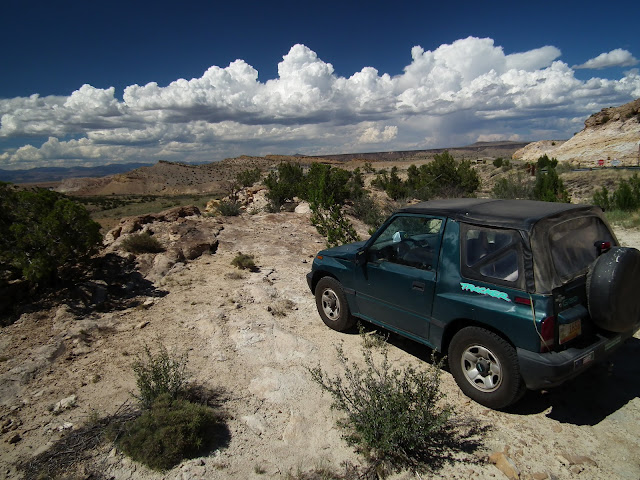 Visitors should exercise caution due to the remote location and secure valuables out of sight when left in a vehicle.

Visitors should also protect themselves from the sun, drink plenty of water and stick to established trails when visiting the dam.

For more info call the Corps Visitor Center at Cochiti Lake at 505-465-0307 or visit their website at http://www.spa.usace.army.mil/Home.aspx

If You Go: Take I-25 south to the Cochiti turnoff at the bottom of La Bajada Hill and then bear left on the bridge across the freeway and follow NM 16 past the asphalt plant turnoff and all the way around to the end at Galisteo Dam. 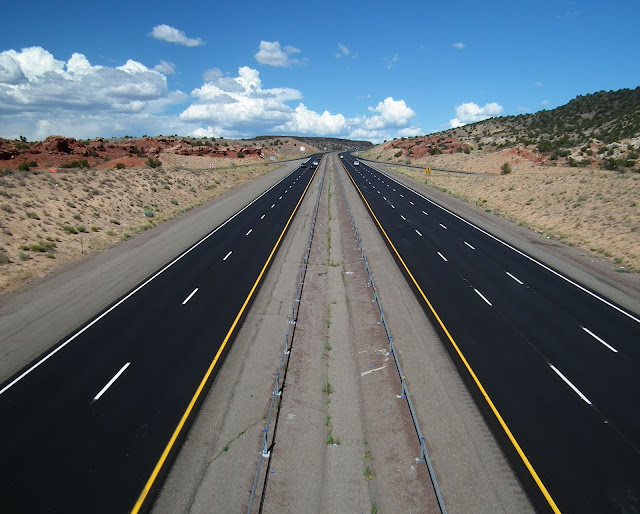 This story was commissioned by and published in the Santa Fe New Mexican on Aug. 5, 2012.
No comments: