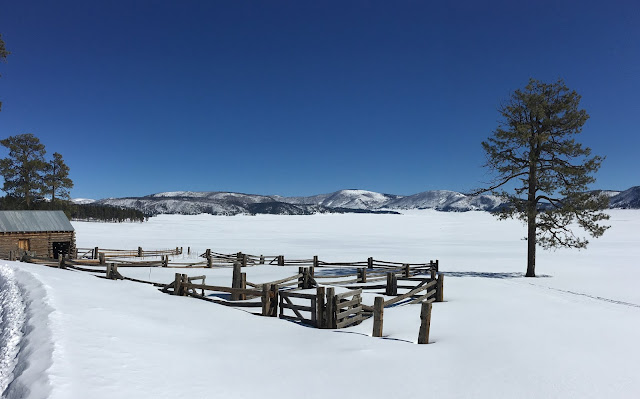 The winter is a great time to visit the Valles Caldera National Preserve especially when it's blanketed in a sea of gleaming snow.

“Anytime is a good time to visit the preserve,” says Kimberly DeVall, Chief of Interpretation and Education for the National Park Service’s preserve in the . “But when we have all this snow it’s really special, simply serene.”

The 89,000-acre preserve off N.M. 4 near the between Jemez Springs and is a great place to go cross country skiing, snowshoeing or just sightseeing when winter delivers snowy weather.

And it’s made even better because the preserve isn’t charging its usual $25 entrance fee again this winter.

Those seeking the kind of quiet solitude only a wide expanse of snow-covered pasture and deep forest can provide will find just that at the preserve. 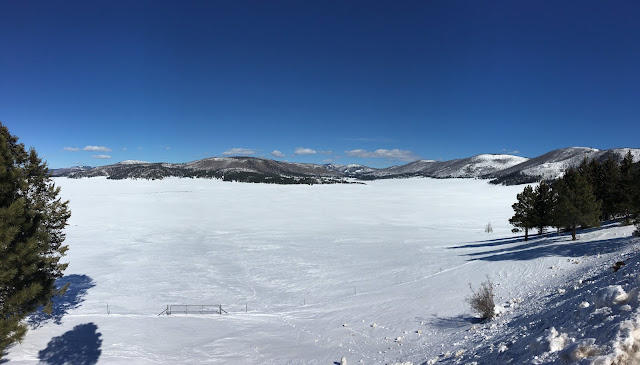 During a recent visit one could see people on skis and snowshoes dotting the huge snow-covered pasture formed by a collapsed volcano.

Inside the visitor center, found a couple miles off the highway, volunteers answered questions and handed out maps to guests while a stack of logs blazed away in the fireplace. The center offers snacks, beverages, books and gifts as well as snowshoe and ski pole rentals. 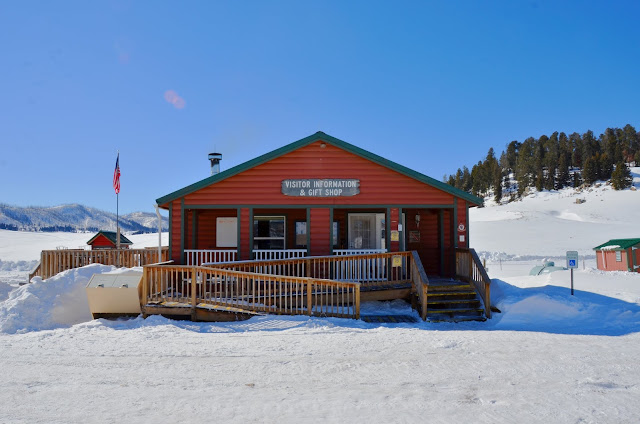 Visitors can ski or hike to the nearby “cabin district” where the park’s headquarters, employee housing and several rustic log cabins are nestled among the trees. Numerous movies and televisions shows have been shot at the Caldera including “Longmire” which features these iconic cabins.

A visit here provides the opportunity to listen to the breeze in the trees, enjoy the scent of pine in the cold crisp air and take in some spectacular views. 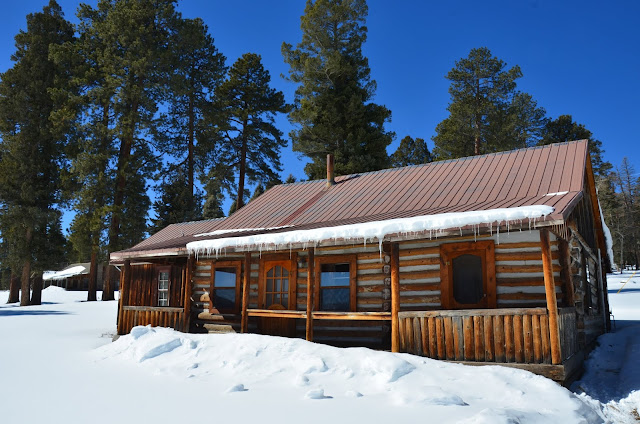 During warmer months visitors will find herds of elk, soaring bald eagles and other wildlife to view at the preserve. There’s plenty of wild brown and rainbow trout to fish for in several creeks and rivers as well as hiking, biking and other outdoor recreation to be enjoyed.

For more information about the Valles Caldera National Preserve please their website at https://www.nps.gov/vall/index.htm.

The preserve was formerly the private Baca Ranch purchased by the federal government in 2000. It was originally operated as a trust overseen by a board appointed by the president of the . Public use was very limited under the trust and the National Park Service was later chosen to take over its operation in October 2014. 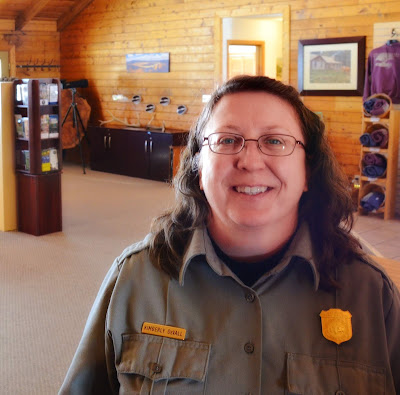 DeVall, who worked with the original trust as a recreational program manager applied for and was hired to work for the incoming National Park Service administration. She has since helped implement changes to provide greater public access to the many outdoor recreational opportunities available at the preserve.

From Santa Fe head north on US84/285 to Pojoaque and take State Road 502 to White Rock and then follow State Road 4 up through the mountains and upon emerging into a great, open area look for the entrance to the preserve on your right, further down the road, about 65 miles. Make a round trip of it by continuing on State Road 4 through Jemez Springs and Jemez Pueblo to State Road 550 for a quick drive down to Bernalillo and then back up to Santa Fe on I-25. Great green chile cheeseburgers and cold beer can be had in a classic New Mexico bar, the Los Ojos, in Jemez Springs.
No comments: 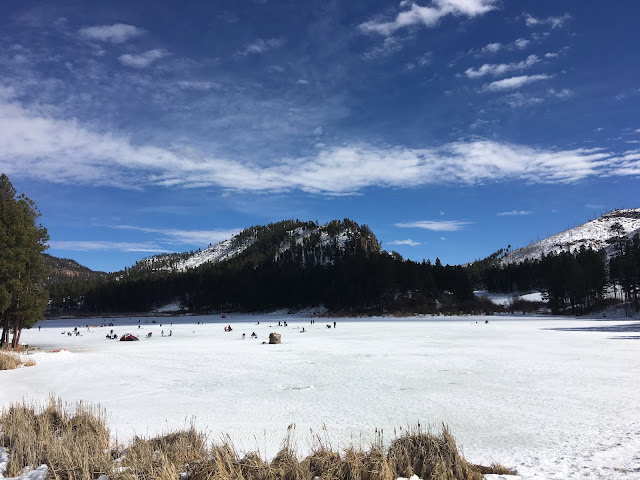 in the is open for ice fishing this winter.

The lake hasn’t been open to ice fishing for several years but this year’s winter storms and colder temperatures have produced ice thick enough to safely support anglers, Sanchez says.

The lake has been stocked with thousands of trout in recent weeks and the fishing has been reported good with meal/wax worms, salmon eggs, spoons or other baits and lures jigged off the bottom.

It remains to be seen how long the ice will hold up so it’s best to hit this lake sooner than later. Sanchez thinks the ice which is over a foot thick should last another three weeks or so.

“It’s not busy during the week so that’s a good time to come too,” he says. Weekends have been busy at the popular park that serves outdoor recreation enthusiasts from the , , Espanola and areas. 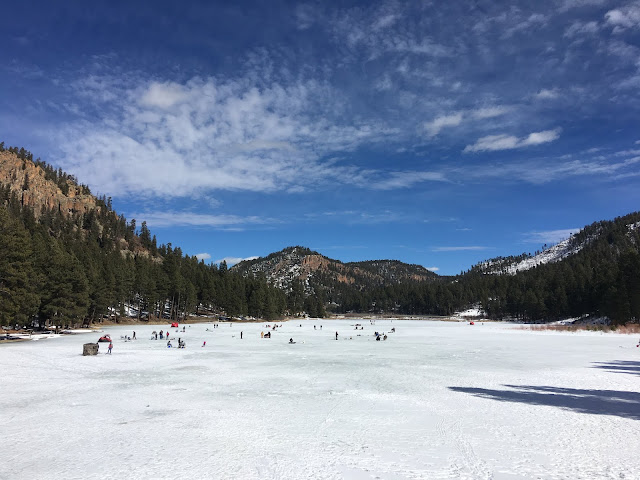 To get started all an angler needs is an axe to chip through an already existing hole and a slotted kitchen spoon to keep it clear.

“There’s already hundreds of holes drilled out there,” Sanchez says.

Anglers venturing out onto the ice might want to wear strap-on cleats as it can be very slick going, Sanchez says.

Bring a sturdy plastic bucket to carry your gear in and then sit on. Dress warmly and in layers.

Other than that keep the wind at your back, the sun in your face and enjoy the fishing.

The park has five camp sites with electricity available for $14 a night. Three are first come, first served and two can be reserved through the state parks reservation website at https://newmexicostateparks.reserveamerica.com/.

Anglers with a valid fishing license needn’t pay a $5 day use fee but will have to leave their vehicle in a lot by the park entrance and walk in.

Fishing licenses bait and tackle and groceries can be purchased at Amanda’s country store in La Cueva. Visit www.jemezcentral.com for more information about visiting the area including fishing reports and local businesses.

Other lakes open to ice fishing in northern include Heron and Eagle Nest and Mundo on the Jicarilla Apache reservation. The area drains also provide good winter trout fishing.
No comments: