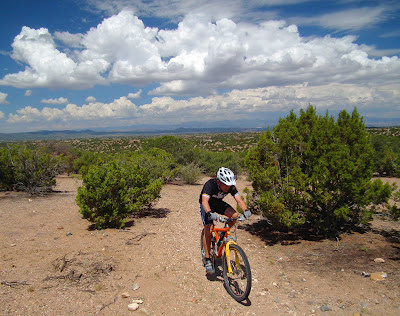 Santa Fe’s 1,500-acre La Tierra Trails public recreation area just got a whole lot easier to use with the addition of new signs and the release of a detailed map to help guide hikers, bikers, horseback riders and others over its 25 miles of trails.

The city’s recreation area off the NM 599 bypass also features a new access road and parking area to the city’s only all terrain vehicle (ATV) and motocross riders’ track and other improvements are in the works too, says Leroy Pacheco of the River, Watershed and Trails Section of the Santa Fe Public Works Department’s Engineering Division.

Outdoor enthusiasts can expect to see the development of two new trailhead parking areas and a new multi-use trail connecting them in the coming months.

And there are also plans to extend a trail from the recreation area through an existing tunnel under the four lane Santa Fe bypass that will lead to the Ortiz Dog Park at the city’s edge.

The work comes as the city prepares to play host to the International Mountain Bikers Association (IMBA) summit to be held in Santa Fe in October.
The organization represents about 750 mountain biking clubs worldwide and the event is expected to draw between 300 to 500 participants, said Mark Eller, Director of Communications for Boulder, Co.-based, non-profit organization.

Mountain biking is a $133 billion dollar industry supporting over a million jobs and attracting about 44 million participants nationwide, according to Outdoor Industry Foundation data.

The city’s popular mountain biking trails at La Tierra and Dale Ball are expected to be a big draw to IMBA attendees due to the trails close proximity to town.
The event should bring in anywhere from $500,000 to a $1,000,000 to the local economy as summit attendees eat, drink and stay in downtown Santa Fe during the three-day event, says Chris Madden, Director of Sales for the Santa Fe Convention and Visitors Bureau.

The city as a sponsor of the event is providing use of the convention center for the length of the summit, Madden says.

The event should go a long way in helping highlight and promote the city and state’s many outdoor recreational opportunities to future, potential tourists, Madden says.

“It’ll be great for you guys,” says Randy DuTeau of the Augusta Sports Council in Augusta, Ga., which hosted the IMBA’s biennial summit back in 2010.
Cycling related tourism has been increasing steadily ever since Augusta played host to the summit and word of the area’s scenic cycling trials in the surrounding forest and along the city’s river trail has spread.

“The summit exposed the secret of our great trail system and launched us into the national spotlight,” DeTeau said. “Now people from all over come to use them.”

It is hoped that Santa Fe’s trails system will have the same impact.

But in the meantime local users are happy just to see the open space northwest of town cleaned up, well marked and better regulated, says Margaret Alexander of the Trails Alliance of Santa Fe.

“They did a good job and there’s something for everyone out there to enjoy,” she says of the city’s efforts.
The new signs will be of great help to those who want to organize events utilizing the space, Alexander says.

The $3 million La Tierra Trails project is funded by open space bonds approved by voters and involved many public meetings and other input from numerous interested parties, Pacheco says.

The area has been public space since its designation as a land grant way back when the city was first formed, he says.

It was used for livestock grazing at one time and the Red Chile railroad line once ran through it, Pacheco says.

But in recent years, it’s frequently been used for numerous outdoor related activities such horse, dirt bike and ATV riding, BMX and mountain biking and by hikers and trail runners.
The latest improvements have taken into account those groups’ needs and it is hoped more city dwellers will make the short trip out to the La Tierra Trails recreation area to enjoy its many benefits, Pacheco said.

Mountain biker Larry Brainerd, 64, of Santa Fe says he’s been making use of the area’s many improvised trails since 2001 and is happy to see others will now find it easier to get around with the help of the new signs.

“This place is great!” the retired schoolteacher and long time cyclist says. “It has zooms, whoops and grinds yet I’m always surprised at how few people I find actually using them.” 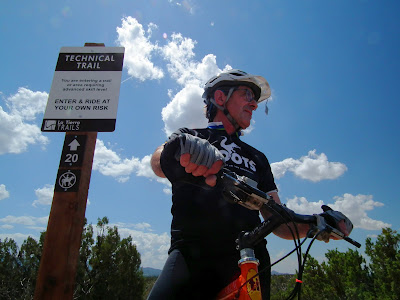 There’s no excuse for that anymore as the city has produced a good, printable brochure and map of the recreation area that can downloaded from the city’s website at http://www.santafenm.gov/DocumentView.aspx?DID=11297

Users are reminded that all city open space rules apply within the La Tierra Trails recreation area including no pets off leash, no motorized vehicles except in designated areas and bikers must yield to hikers on all trails.

If You Go: La Tierra Trails is located off NM 599, the Santa Fe bypass, between Camino de los Montoyas and Camino la Tierra. 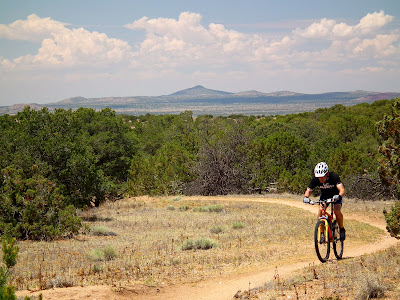