After a recent wave of bountiful snowstorms swept through northern New Mexico the sledding season is in full swing and just in time for the holidays.

“We’ve seen a lot of snow up here lately and the sledding has been great,” says Joe Cristopherson, Superintendent of Hyde Memorial State Park in the mountains just above Santa Fe.

The park boasts a couple of 100-yard sledding runs where adults and kids armed with plastic saucers, toboggans or rubber inner tubes can have a ball whisking down the hill. 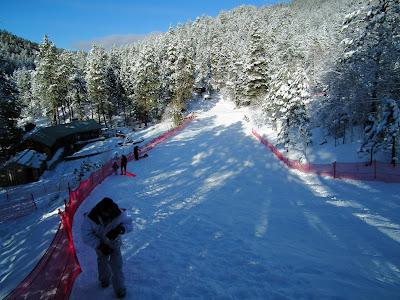 No metal sleds or dogs are allowed on the sledding runs for obvious safety reasons, Cristopherson says.

A $5 day use fee is required per vehicle while the purchase of a $40 annual pass will provide unlimited visitation to any and all state parks.

Parents using the sledding run are asked to supervise children and encourage them to wait for others to complete their runs before starting down themselves.

Sledding can be accomplished easily with as little as a stout piece of cardboard but others may want to stop in at Cottam’s Ski Shop located inside the state park’s historic lodge and pick up a plastic saucer or toboggan. 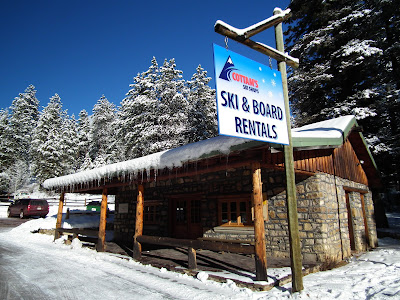 Both cost around $20 and visitors to the sledding hill will also find hot chocolate and other refreshments available inside too, says Lyndsay Cottam.

The lodge features an outdoor patio on the backside where folks can relax and watch sledders coming down the hill.

And while store-bought sleds are convenient, it is the inner tube that reigns supreme amongst serious sledders in New Mexico.
Inner tubes provide a slick and bouncy, old school kind of ride, and can’t be beat for bouncing off trees and other people.

“We have them on hand especially for those customers,” says Kris Griffin, manager of Discount Tire next to the Horseman’s Haven on Cerrillos Road in Santa Fe.

A rubber inner tube costs from $12 to $20 depending on the size and will provide hours of enjoyment, Griffin says.

And if you’re planning on doing some serious tubing, then there are a couple of spots in northern New Mexico that shouldn’t be missed. 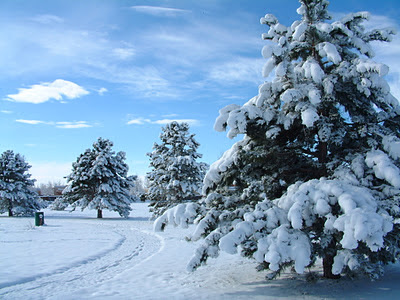 The sledding hill at the Agua Piedra Campground in the Carson National Forest just north of Sipapu Ski Area is, like its brethren at Hyde Park, an old ski run.

One of the first ski areas in the state, the run at Agua Piedra provides cheap thrills in a forested setting on the banks of the Rio Pueblo north of Penasco, says Josie Lopez of the Sipapu Ski Resort.

The store at the ski resort off NM 518 also carries plastic saucers and toboggans as well as groceries and other refreshments, she said.

Sledding is not offered at the ski resort itself.

Those looking for a sunny, gently sloped meadow to sled will find just what they’re looking for on US Hill off NM 518 on the back road to Taos, says Kathy DeLucas, Public Affairs Officer for the Carson National Forest. 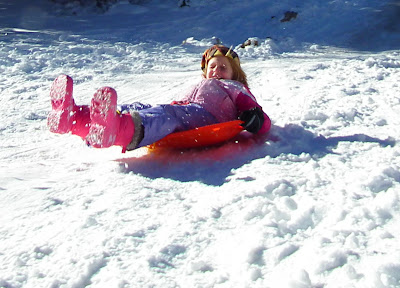 This location is a big draw for families because of its gentle nature and great scenery, she says.

Those venturing outside for sledding should expect to work up a sweat while having fun and thus should stayed hydrated, wear appropriate clothing and apply sunscreen too, DeLucas says.

And lastly, those new to the sport should be aware of the inherent rough and tumble nature of the activity and the effect that may have on children. 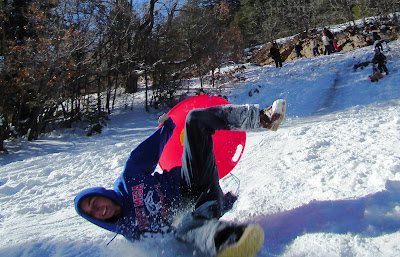 If You Go: Hyde Memorial State park is located of Hyde Park Rd on the way up to the Santa Fe Ski Area. The Agua Piedra sledding area is located off NM 518 on the road to Mora, just past the Sipapu Ski Resort. Take the highway to Espanola and turn off at NM 76 and follow up to Penasco and then NM 518. US Hill is located off NM 518 also but in the other direction on the road to Taos. An alternate route is following NM 68 out of Espanola, north along the Rio Grande, towards Taos and taking the NM 75 turnoff at Embudo and following to Penasco and on to NM 518.
1 comment: 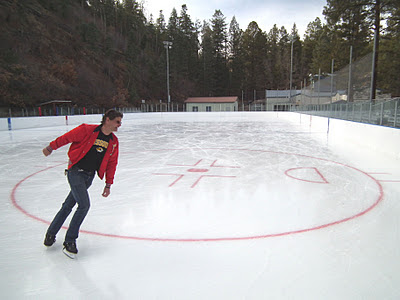 It’s opening day at Los Alamos’ open-air skating rink and Andy McCown is thrilled to be the only one on the ice during the lunch hour session.

“Because I’m still a little rusty,” he says as he chops and glides his away around the regulation size rink.

McCown enjoys skating during his noon break from the lab and knows it won’t be long before he has plenty of company at the popular recreational facility operated by Los Alamos County.

“It’s even better on a cold, clear starry night when I bring my wife,” he says. “It can be really romantic.”

The rink at Los Alamos is finally open for the season, delayed by a couple of weeks due to emergency repairs to the flood damaged roadway in front of the complex off West Road.

But now the cool, shady canyon will once again resound with the slap and thunk of hockey pucks careening off the boards or the latest hit music drifting out of the facility’s sound system.
The rink is generally open seven days a week, all day long and well into the evening during the three month skate season, says Dianne Marquez, Recreation Program Manager for Los Alamos County.

“We have lots of public skating and one of the one of the largest youth hockey leagues in the state,” she says.

About 300 kids a year are usually enrolled each year including kids of all ages they play teams from Colorado and Arizona.

Adults with some hockey experience and equipment can show up on Friday around noon or on Sunday and Tuesday evenings for pickup games.

Those just interested in just skating round can find plenty of times available on the schedule too.
There’s plenty of special events too, including an ongoing tradition on Christmas Eve, the Luminaria Skate.

Marquez says farolitos are arranged on the ice around the edge of the rink while colored lights are draped over the glass on top of the boards.

Then all other lights at the facility are turned off and Christmas carols are played over the rink’s sound system while visitors enjoy an evening of skating and holiday merriment.

“It makes for a very special evening,” she says.

Hot chocolate and other beverages are included with admission, she noted. 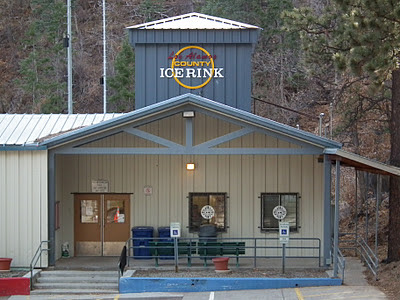 The Los Alamos rink has been in operation since the 1940s when members of the former boys’ school there dammed up the creek to form an ice skating pond in the canyon.

Over the years the all-volunteer Los Alamos Skating Association made improvements, added buildings and other equipment including one of the original Zamboni ice grooming machines.

The machines invented by Frank Zamboni were designed to scrape used ice clean and then lay down a new layer of water to freeze and form a clean sheet of ice for skating.

The early model obtained by the skating association was mounted on a World War II-era Jeep and provided excellent service until a 1973 fire in its garage left it damaged.
The association wrote to the Zamboni Company inquiring about repair parts for the aging contraption and heard back from the company that the association was in possession of one of the earliest machines the company had ever built.

It turned out that the Zamboni at Los Alamos was only the fourth unit the company had turned out, way back in 1952, and it had toured with the Ice Capades before being replaced by a newer model, according to information about the unit provided by Paula Cooney, Brand Manager for Zamboni of Paramount, Calif.

Zamboni # 4 had ended up in the hands of an Albuquerque ice skating rink operator who would later sell it to the skating association of Los Alamos in 1960.

At the time the Albuquerque rink offered the Zamboni and other equipment to the association for just $1,500 but required all of it to be hauled off within a week’s time.

So a caravan of association members drove down off the hill in their pickups to Albuquerque where they loaded up the gear and then headed home at a snail’s pace with the lumbering Zamboni sandwiched between them.

Once the Zamboni Company discovered this early model, they asked to swap for it and then had it restored. It now rests on display at the United States Hockey Hall of Fame in Eveleth, Minn.

In the meantime the Los Alamos rink was taken over by the county in the mid-1980s and has since traded in the swapped model for a newer one, Marquez says.

In 2002 the county made improvements to the rink by putting in a refrigeration system which has vastly improved ice conditions, Marquez says.

The rink has skate rentals and a snack bar, offers skating lessons for youths and adults and rents the ice for parties or other special occasions.

For more information see the county’s website at http://www.losalamosnm.us.

If You Go: From Santa Fe take US 84/285 North to the Los Alamos turnoff at Pojoaque and take NM 502 to Los Alamos. Follow Trinity Drive through town to just past the hospital, turn left onto Diamond Drive and then make a quick right onto to West Rd.