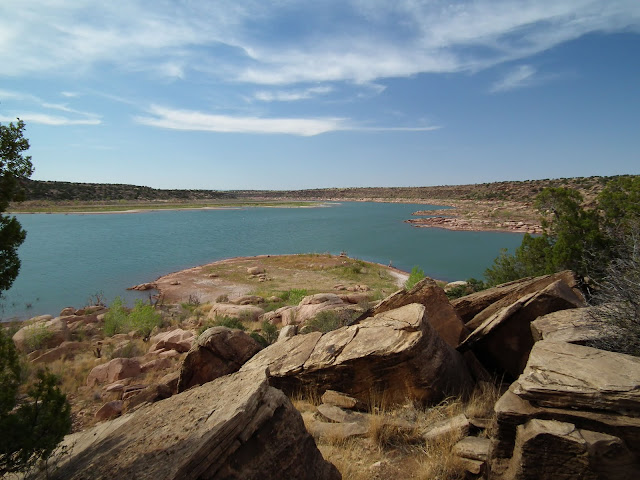 It may be one of state’s best kept secrets, the historic cottages for rent at Conchas Dam where guests can lounge under a big shade tree while gazing out over the lake on New Mexico’s eastern plains.

“It’s real peaceful here,” says Fran Gabel, who operates the Adobe Belle Resort at Conchas Dam. “And it’s got to be the prettiest lake in the state.”

The cottages, four duplexes built by Civilian Conservation Corps workers during the Great Depression served until 1999 as housing for U.S. Army Corps of Engineers employees stationed at the dam. 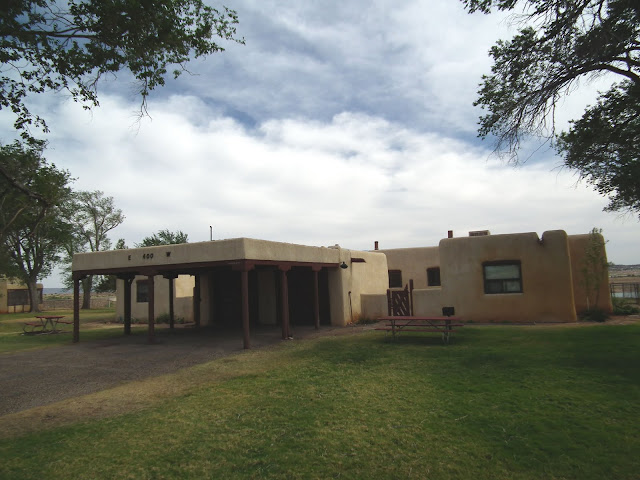 They have since been made available to the public for rent and are operated under lease by Fran and Tony Gabel, who intend to retire in October.

“We’ve met so many nice people over the years and built up such a good clientele that it’ll be hard to go,” Gabel says. “But it’s time to retire.”

Gabel says the cottages are usually booked well in advance and they’ve never really needed to advertise due to the good reviews that guests have passed on to others over the years.

So don’t bother going online to find any web pages promoting the resort, they’re just not there, not on the Corps’ own website or even at federal government’s all inclusive, recreation.gov website.

But an inquisitive visitor to the dam can see for themselves the two-bedroom cottages with their hardwood floors, exposed vigas, thick adobe walls, kiva fireplaces and tiled bathrooms. 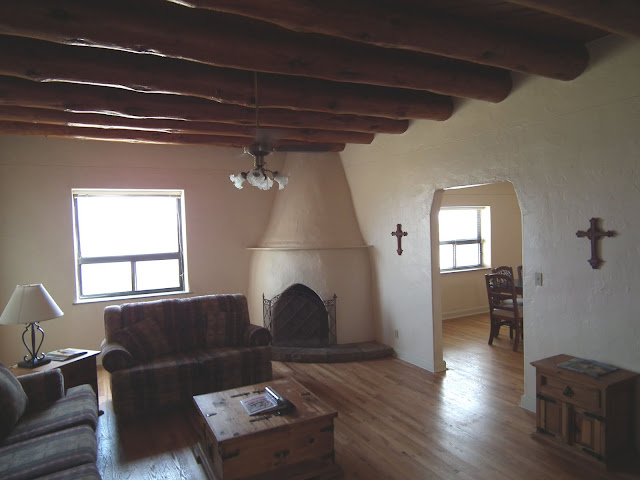 The cottages also boast flagstone-lined and enclosed patios, shaded carports, swamp coolers and plenty of quiet seclusion in a little neighborhood nestled under a canopy of aging shade trees located behind the Army Corps offices at the dam.

“A lot of people come for the fishing,” Gabel says. “Others just like the peace and quiet. There’s no cable, telephones, internet or anything like that.”

Instead visitors will find an oasis in the desert that offers excellent fishing for walleye, bass and other warm water species as well as other recreational activities like swimming, water skiing, sailing or just playing on the beach. 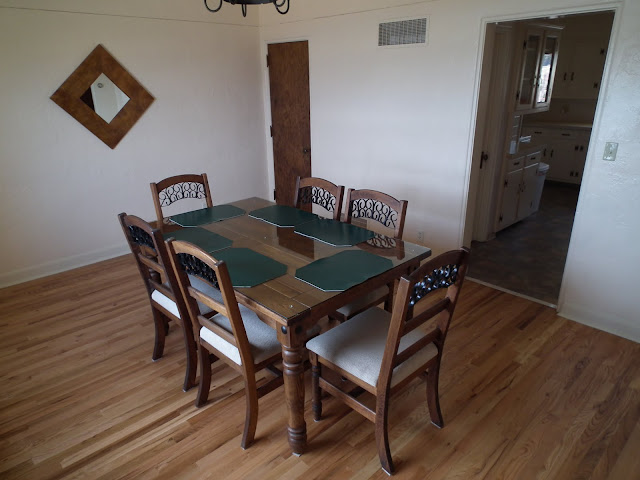 And if it’s history you’re into, then Conchas Dam and Lake offers a lot.

Built primarily as a public works project to provide jobs to New Mexicans at a time when half the state was unemployed back in the 1930s, the dam provides flood control, irrigation and recreation today.

It is listed on the National Register of Historic Places in part because of the Spanish/Pueblo Revival architectural style used throughout the project.

While crossing the dam one might notice the bronze doors and wrought iron lantern fixtures built into the structure. 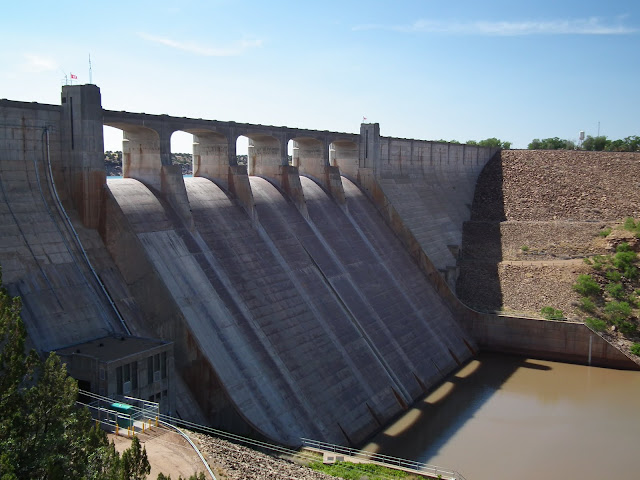 A stop at the Corps office will reveal paintings by artists employed during the Depression that document the dam’s construction.

And the visitors’ center is stocked with interpretive and historical displays and a video of the dam’s history.

But what one can’t see any longer is the town that was carved out of the desert on the Bell Ranch just downstream of the dam to house some 2,500 workers and their families while the project was underway.

Ninety percent of the workers on the project came off the relief rolls, earning between 25 to 45 cents an hour.

The town known as Conchas City consisted of 36 dormitories, 132 stand-alone homes, multiple offices and workshops; all built from handmade adobes or carved sandstone, according to published accounts of the project’s history.

There was a mess hall to feed 1,500 workers a day, a 24-bed hospital considered one of the best in the state at the time and related businesses including a gas station, drug store, restaurant, pool hall, grocery store, barber and tailor’s shops.

The community hosted a grammar school and high school, a 700-seat movie theatre that was the envy of the area and even tennis courts and a golf course.

Electricity was provided for the town by generators powered by natural gas obtained through a pipeline laid by workers to Tucumcari, some 32 miles away.
The town was later dismantled when the 235-feet high, 1,250-feet long dam, $15-million dam was completed after four years of construction. Many of the same materials were later reused by CCC workers to create the Army Corps’ offices, workshops and the cottages at the dam.

A history of the U.S. Army Corps of Engineers Albuquerque District by Michael E. Welsh provides in-depth details about the dam project including ethnic tensions, political scandals and other issues that arose and may sound familiar today.

For example, primary contractors on the job brought in some Mexican Nationals from their Los Angeles base of operations who were deemed more competent and learned in the ways of heavy construction than the relief roll workers of whom 60 percent were poor local Hispanics from farming and ranching backgrounds, according to Welsh’s book.

This led to ethnic tensions during the project which still exist for many New Mexicans to this day.

And a prominent U.S. Senator, Dennis Chavez, was at the heart of allegations that he had placed relatives and family members inside the public relief system who pressured relief workers statewide to make campaign contributions to the Chavez political machine or face transfer from their hometown relief jobs to the remote project at Conchas Dam, according to Welsh’s book.

This earned the Conchas Dam project the nickname “Devil’s Island” among some workers who were forced to toil there.

Today the dam provides about eight jobs for Corps workers like Daniel “Joe” Martinez, 47, of nearby Garita, who had lived in the cottages for 10 years and was the last worker to leave before the buildings were turned over to a private concessionaire as a cost savings measure.

“We took good care of them and it was one big happy family living here then,” Martinez, a 26-year veteran of the Corps at Conchas Dam, says of the six to eight families that lived there at the time.

Martinez’s two sons spent their childhood years growing up on the lake and living in the cottages and he is grateful they had that experience.

“It was really great,” he says.

Martinez’s boss, Steve Peterson, 50, says that the lake is currently at about 25 percent of capacity while the lake level is about 41 feet below the spillway due to the ongoing drought.

But fishing, boating and other recreation hasn’t suffered that much and remains fine, Peterson says.

“Come on out,” he suggests.

Cottage rentals are $125 a night, pets are not allowed and no smoking is allowed inside the buildings. Midweek vacancies should be available for booking during late August and September, Gabel says.

Anyone interested in running the resort after the Gabel’s retire should contact the Corps District Office in Albuquerque about the application process.