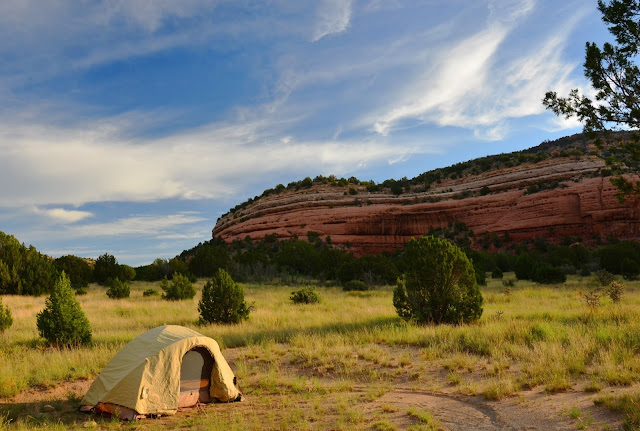 Hidden deep in an unseen canyon far out on the prairie of New Mexico lies a tranquil, riverside campground where the history, scenery and solitude make for an exceptional stay.

Mills Canyon is on the Canadian River near the small farming and ranching community of Roy where mountainous clouds loom over a seemingly endless spread of grassland.

It’s may not be one of the Forest Service’s bigger draws but it’s a great little campground for those venturing out onto the plains to see the Kiowa National Grasslands.

“It’s this totally unexpected jewel out there in the middle of the prairie,” says Mike Atkinson, 58, District Ranger for the Kiowa and Rita Blanca Grasslands of the U.S. Forest Service’s Cibola National Forest. “And you’d never know it was there until you see the tops of those ponderosa pines.”

Visitors follow NM 39 north out of Roy to the well marked turnoff at Mills for a seven mile jaunt along a good gravel road stretching out across the plains. 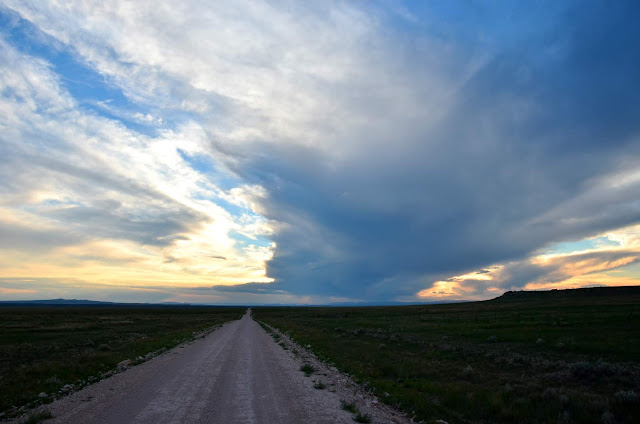 Then with the suddenness of falling off a cliff the road turns a corner and drops steeply into the canyon.

The rocky, narrow road traverses a few tight curves, some switchbacks and a couple of slight dips during its three mile descent and is unsuitable for most recreational vehicles, travel trailers and touring buses.

Visitors in larger vehicles can stay up top at a convenient campground found just off the road at the canyon’s edge.

Those headed down to the campground below will pass under towering Ponderosa pines and see scrub oak, juniper and pinon pine on the hillside.
Visitors will find several wide spots on the road where interpretive signs have been placed that explain the canyon’s history, geology, wildlife and other interesting information.

From these spots on the road visitors can also see the pea green river sparkling below and the red faced cliff walls fringing the canyon.
“It’s a breath taking drive in,” Atkinson says.

Once down below visitors can pick one of 12 camp sites either hidden among the trees by the river or a little further back along the road with a clearer view of the sky. 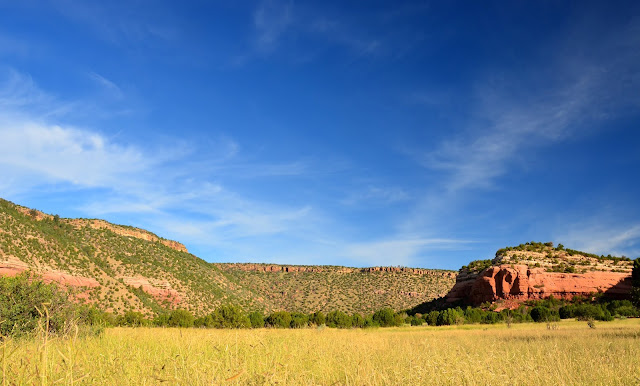 This is a primitive campground with no running water, electricity or trash collection so visitors must pack out what they brought in.

The canyon itself features stands of cottonwood and juniper trees, wide pastures and the still standing rock walls of abandoned buildings with more interpretive signs.

Visitors will learn that what nature has now reclaimed and hidden was the once thriving, turn of the century agricultural empire operated by Melvin Mills, a shrewd businessman, district attorney and legislator whose mansion in Springer still stands.

Mills had consolidated family homestead holdings within the Canadian River canyon now named after him and created a progressive farming and ranching operation complete with a complex irrigation system, numerous fruit and nut orchards and solid stone buildings, according to published historical accounts. Read more about the history of Mill's Canyon at http://hardingcounty.org/mills.html.

Much of the bounty from Mills’ cattle and agricultural operations was hauled to nearby railroad depots in Springer and Wagon Mound to help supply the railroads’ Harvey House hotels.

Mills also built a hotel to service vacationers brought into the canyon by stagecoach and his operation thrived as a vacation resort. 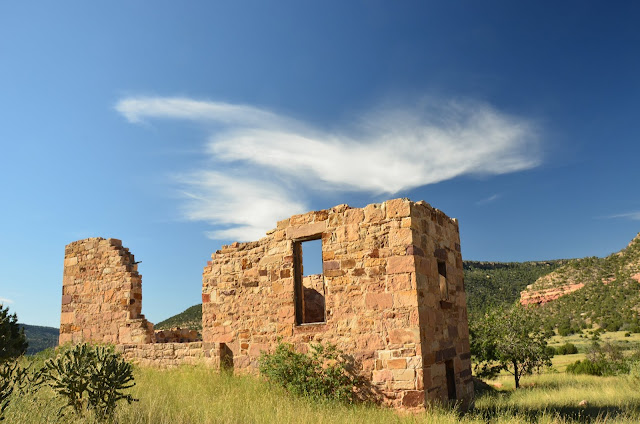 But in 1904 a massive flood brought on by unseasonably heavy rains roared through the canyon, wiping out his empire and burying much of it under several feet of silt and debris.

Mills never recovered and abandoned the canyon to help build the town of Mills back up on the plains.

But despite his many successful business efforts, the man is said to have died penniless and dependent upon the generosity of others.

Meanwhile the town of Mills and the surrounding plains prospered as homesteaders flocked to the area and took up farming.

But once again nature and fate stepped in to put a halt to man’s best laid plans.

The Great Depression and the Dust Bowl conspired to drive many off the plains and all that remains now of the town of Mills is a couple of ranch houses and a desolate windmill.

In the end, federal government was forced to step in to save this area of the prairies from any further losses.

The national grasslands are the remains of those efforts, four tracts of federally managed grasslands with two in New Mexico. About 78,000 acres around Mills Canyon and another 57,000 acre tract near Clayton.

Both are administered by the Forest Service’s Kiowa and Rita Blanca grasslands office in Clayton. For more information visit the Cibola section of the U.S Forest Service Web site at www.fs.fed.us/r3/cibola or call the ranger office at 505-374-9652.

Back down in Mills Canyon, visitors can explore the remains of Mill’s stone-built, two-story hotel, relax in the cool shade of the carved sandstone cliff walls or wander among remaining stands of orchard trees.

And the river is said to even harbor a good population of catfish to keep anglers happy. 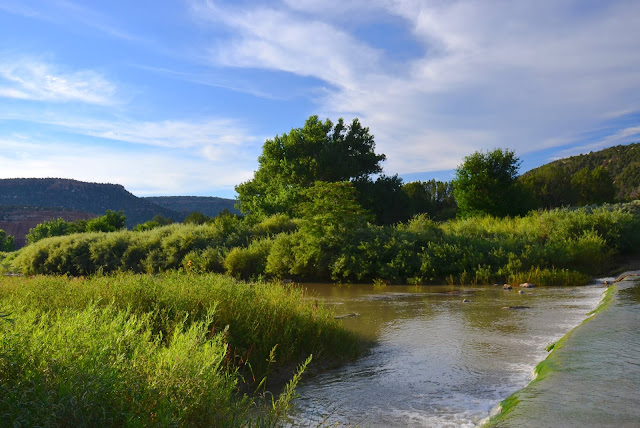 During the summer months visitors will find the temperature here rises quickly but with plenty of shade and maybe a spray bottle of water for swamp-cooler like relief one can easily ride out the afternoon comfortably.

Be aware of the potential for encounters with snakes and other wildlife and take preventative measures to limit risks.

The campsites here are free to use and visitors supplied with plenty of water, ice and insect repellent can enjoy a very leisurely stay due to its remote location.

Visitors can find most everything they’d need for an enjoyable outing to Mills Canyon in the nearby, tidy little town of Roy. The town boasts a bar with package sales, a 24-hour gas station, a diner, bank, grocery/hardware store and even a little old fashioned motel.  Buy your camping and other supplies here and help keep the rural economies thriving.

From Las Vegas head northeast on I-25 to Wagon Mound and turn east towards Roy on N.M. 120. At Roy take N.M. 39 toward Abbott and about 10 miles out of town turn west on Mills Canyon Road and follow for about seven miles to the canyon rim.
1 comment: