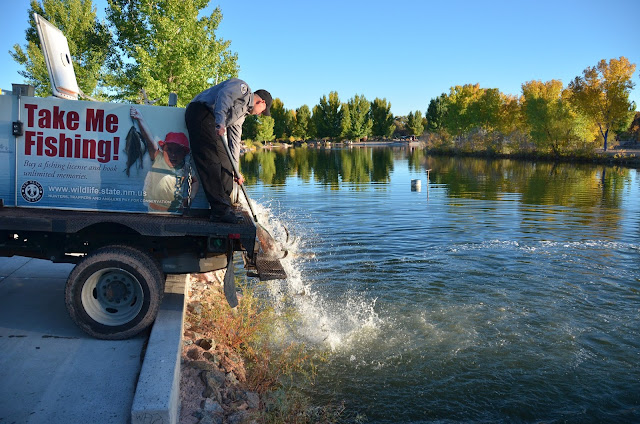 Anglers can still catch plenty of tasty fish during the winter as the New Mexico Department of Game and Fish switches from stocking catfish to trout in many statewide waters.

Every fall, the department switches from stocking catfish in the summer to trout in the winter at , the area drains and other popular fishing waters in the southern half of the state.

“Trout fishing in small community ponds in southern  is especially popular during the winter," says Dan Williams, spokesman for the New Mexico Department of Game and Fish.

Catfish thrive in warmer water while trout prefer it much cooler, and these waters are ideal for this kind of stocking program.

Rainbow trout, including some big ones, are already being stocked at multiple locations in the drains that run alongside the .

"We’re fortunate here in  to have waters such as  and the Albuquerque-area drains that cool off enough in the winter to allow us to stock trout for anglers to catch,” Williams says.

Although the department doesn’t disclose exact stocking spots, general locations include: N.M. 550 river bridge in Bernalillo, the Corrales drain along the bosque, and the Rio Grande Open Space off .

Trout in the drains usually can be found in deeper pools, under the shade of overhanging trees or around any kind of protective structure.

Try using a salmon egg or worm on a short piece of lightly weighted line just below a bobber or bubble so the bait rides just above the bottom. Spinners and flies are good lures too.

Most areas along the drains are open to the public during daylight hours and can be accessed by walking, riding a bike or driving if permitted.  For more information about riverside recreation in the area, visit the city’s website at www.cabq.gov.

At , anglers will find a kids pond for anglers younger than age 12, a central pond where bait is allowed and the bag limit is four trout per day. There is also catch-and-release only pond where only single, barbless hooks on artificial flies and lures may be used.

Anglers ages 12 and older need a current fishing license. Call the department’s customer service line at (888) 248-6866 to immediately get one. A license also can be purchased online at www.wildlife.state.nm.us or from vendors such as bait and tackle shops and sporting goods stores.

, also called , is operated by the City of and features a café, restrooms, hiking and biking trails and security guards on patrol. See the city's website for more information.

Good winter trout fishing also can be found within a moderate drive from , including the at and Villanueva state parks. Anglers can wet a line for trout at just outside of Socorro or on the below at Truth or Consequences.

Anglers will find plenty of well stocked winter trout fishing waters in the southern part of the state. For a list of those waters visit the department’s website at www.wildlife.state.nm.us. Most of the state's best fishing can be found at state parks. Visit their website for more information.

Northern New Mexico's salmon snagging season has gotten off to a slow start with anglers reporting much fewer fish being caught this year.

"Some locals had a little luck  a couple weeks ago but its been real slow since," said Mike Bowman, park ranger at Eagle Nest Lake State park.

That leaves Heron Lake where long time fishing guide Don Wolfley reports that salmon stocks have been way down over the past several years.

"It's been terrible," he said. "I haven't guided in three years now."

The snagging season at Heron Lake opens on Friday, Nov. 10, and it remains to be seen how well anglers will do.

"We've been expecting the populations to be pretty low," says Eric Frey, sport fish program manager for the New Mexico Department of Game and Fish.

Kokanee Salmon are stocked in these northern New Mexico reservoirs where the cold deep waters produce plankton upon which the fish can feed.

The fish are landlocked, sockeye salmon that upon reaching sexual maturity, usually at the age of about four years old, will mass in schools during the fall in a futile effort to spawn.


Because salmon typically need a river and other proper conditions under which to reproduce, these spawning fish will not enjoy much success.

Then they’ll begin to die which is And why the department created a special snagging season to allow anglers to catch and keep up to 12 salmon a day.

Heron Lake's salmon snagging season is delayed to allow state Department of Game and Fish personnel time to trap and milk spawning salmon for their eggs and sperm.

The collected eggs are fertilized, sorted and then reared at the department’s nearby Los Ojos Fish Hatchery so they can be used to restock the state's deep water lakes with the popular sport fish.

The salmon stocking program is very dependent upon the annual salmon milking operation at Heron Dam to produce more fish.

But several years drought, low reservoir levels and poor water quality have harmed the salmon population and much fewer eggs have been collected, Frey said.

The department is obtaining additional eggs from out of state this year and hopes to have a decent amount of fry to replenish populations.

Wolfley says he guardedly optimistic that Heron Lake's salmon population will rebound sometime in the next few years so he can return to guiding.

In the meantime he expects the die-hard salmon snaggers to turn out on opening day at Heron Lake if for nothing else than to have a good time with family and friends.