In the dead of winter when most anglers are yearning for a fight with a feisty trout there are only a few places one can try in northern New Mexico.

But for those seeking the solitude of a lonely stretch of river, incredible scenery and the possibility of catching a fat fish, then the Rio Chama below El Vado Dam is where it’s at.

Located just a couple hours north of Santa Fe off one of the most scenic highways in the state lies a secluded stretch of the Rio Chama where trout fishing can be had in the midst of winter.

During a mid-week, early February trip we found the river free of any other anglers and caught a couple of fine examples of the big trout that lie in wait in the murky waters below the dam.

Anglers will find up to six miles of good fishing on the river below El Vado dam as it carves its way through a deep, wild canyon before being confined again by the dam and lake at Abiquiu. 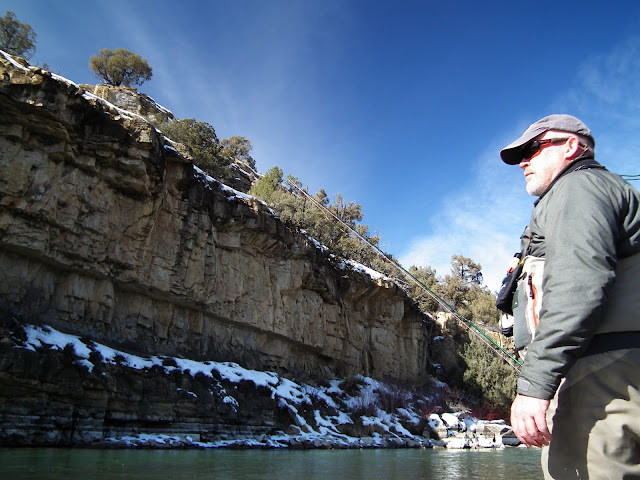 Designated a federally protected Wild and Scenic River for 25 miles below the dam at El Vado, the river is popular among rafters, canoeists, kayakers during the spring, summer and fall months.

The river is then frequently running high to supply downstream irrigation demands and provide an adequate flow for river runners.

But in the winter when the gates are shut down and the water drops, anglers in the know make the trip to this stretch of water to enjoy its fabled fishing.

“This is a place where anglers really need to dial back their expectations, though,” says Toner Mitchell, veteran fishing guide, former manager of the Reel Life fly shop and a Santa Fe native. “It’s the kind of river where if you catch a trout, then you’ve had a good day.” 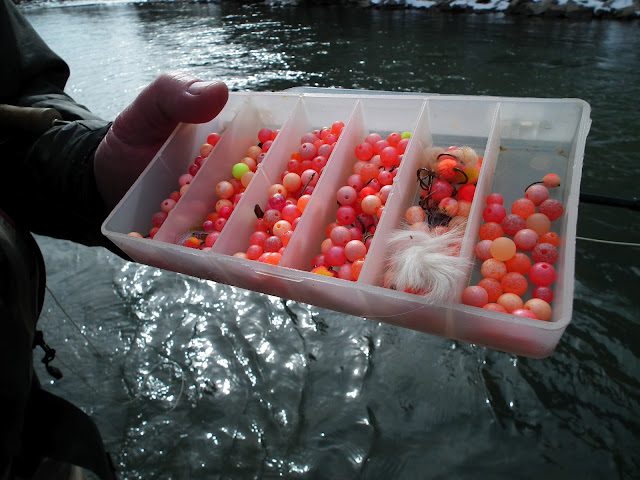 Those fishing with a spin-casting rig will find that baits like worms and salmon eggs drifted under a bubble may work much better than using a spinning lure due to the sluggishness of trout during the cold winter months.

The same applies to fly fishermen and women.

Egg and worm patterns presented at the proper depth and methodically dead drifted through a target area may work much better than stripping a streamer through a pool, Mitchell says.

But regardless of the fishing gear used, the real key to success on the Rio Chama in winter may have more to do with the weather than anything else.

Being prepared to hit the river when the weather turns mild during breaks between storms and cold fronts is critical to catching fish when they’re feeding, Mitchell says.

The trout may then be found loitering at the tail end of a pool where a good, dead drift is essential for attracting one’s attention or they may be feeding up in the shallow riffle just above the pool. 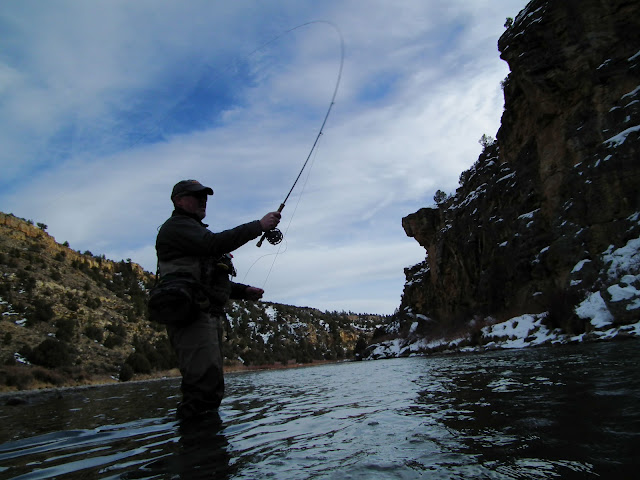 That’s why it’s crucial to methodically fish an entire segment of water before moving on, Mitchell says.

It’s also very important to use a proper weight to get the fly or bait down into the zone where the fish are holding, Mitchell says.

Too much weight and your offering may drift right under the trout while too little may put it out of their reach.

“Sometimes you have to literally hit them on the head with it before they’ll bite,” Mitchell says.

And changing weight while also adjusting the length of a strike indicator, bubble or bobber can often be more significant than what fly, bait, or lure is being used, Mitchell noted.

Anglers should also be prepared to deal with the Rio Chama’s notoriously slick streambed where studded, felt-soled wading boots are highly recommended. 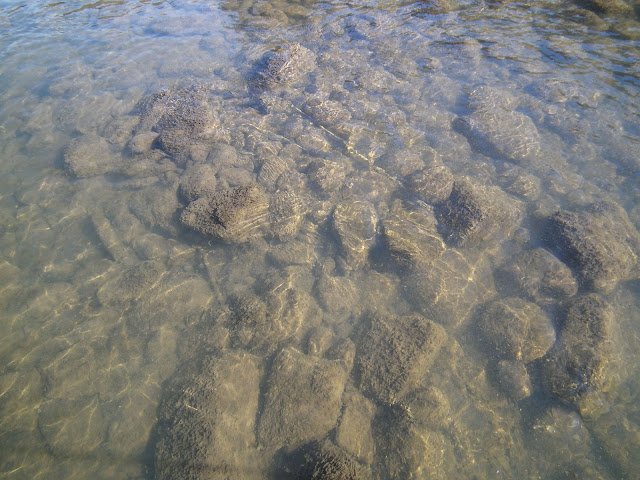 Anglers venturing into the canyon should also be prepared for a day outdoors by dressing in layers, carrying plenty of water and having an emergency space blanket, fire starter and a couple of high energy bars on hand - just in case.

It should be noted that the state record brown trout came out of the Rio Chama and can still be seen mounted on the wall of the El Vado Ranch store, says owner Dave Cooper.

Measuring in at 35.5-inches in length and weighing just over 20 pounds, the monster brown trout was caught with a live minnow by G.T. Colgrove of Decatur, TX, on July 8, 1946, Cooper says.

Cooper, 65, grew up by the river on the 100-acre ranch his parents owned and says big trout are still routinely pulled out of its waters with the average brown trout measures about 17 inches and some being caught as big as 28 inches.

“It’s still one of the best fisheries in the state,” Cooper says with pride. 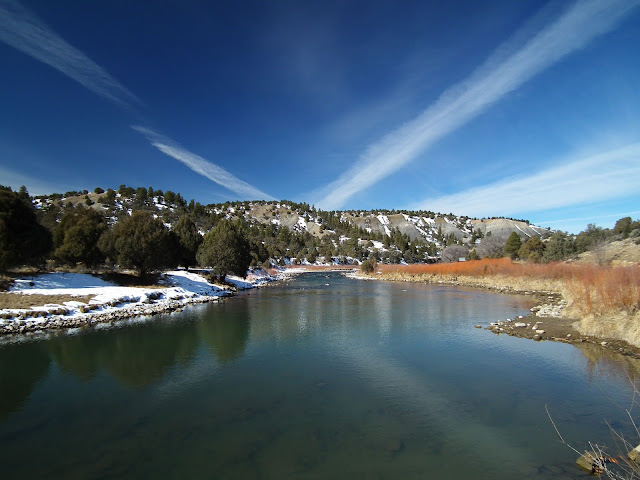 El Vado Ranch offers anglers parking on the river at $5 a day and sells some tackle and groceries in its store.

Fully furnished log cabins are also available for those who might want to stay the night after a hard day of fishing.

Cooper said anglers who need something might have to go looking for him as he is frequently not in the office and out on the property instead during the winter months.

And while the Rio Chama continues to produce excellent fishing year after year a study of the river’s health is underway, says Steve Harris of the non-profit Rio Grande Restoration Project and owner of the rafting company Far Flung Adventures.

And negotiations with the governmental agencies that own and control the river’s water is underway too which will hopefully lead to improvements on a number of different fronts.

“They recognize things can be improved,” Harris says. 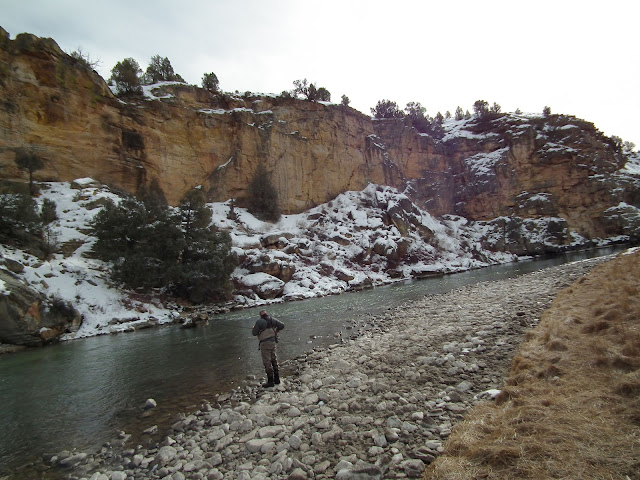 Those and other suggestions are part of ongoing discussions with a number of agencies including the Bureau of Reclamation which operates the dam and appears receptive to revising its operations to improve conditions on the river, Harris says.

IF YOU GO: From Santa Fe take US 84/285 north to Espanola. Continue on US 84 north to the blinking yellow light at the crossroad of NM 531 near the village of Tierra Amarilla. Turn left onto NM 531 and follow past Escalante High School to the intersection of NM 112 and turn left again. Follow to the turn off for El Vado Ranch just before reaching the dam.