Bandelier Now Even More Spectacular with New Theatre and Film

But now Bandelier National Monument is all that much better with the recent addition of a new high tech theatre showcasing a visually stunning film of the monument and its surroundings.

And that’s just another fantastic reason to visit one of New Mexico’s most intriguing Indian cliff dwellings. 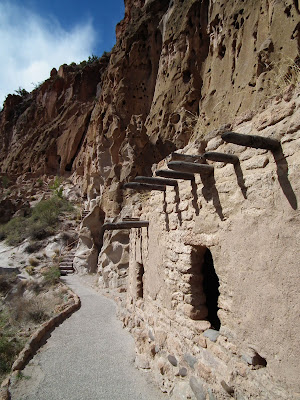 The film was shot during different seasons of the year with many scenes taken by helicopter and played back in slow motion to give viewers the sense of flying over the countryside.

In one scene the viewer is treated to a flight just off the deck of the muddy, sun drenched, Rio Grande with a flock of birds leading the way.

In another scene the viewer is taken for a soaring ride up a canyon ablaze with aspens in full fall colors. 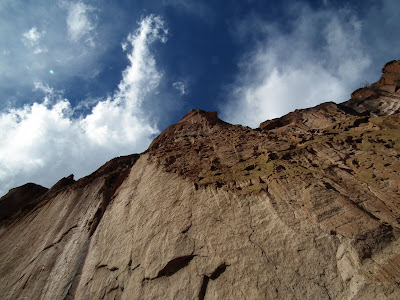 Grabowska, who has produced many National Park Service films in his twenty-year career, including two others in New Mexico, says even he was impressed with the overhead views.

“The aerials were a real revelation since I'd driven and hiked all over the region and
thought I knew it pretty well,” Grabowska said by email. “But the bird's eye view revealed just how rugged the Jemez Mountains and Pajarito Plateau really are.”

Other shots employ the use of time lapse photography to convey the passing of a day, with clouds scurrying overhead and shadows shifting to mark the movement of the sun.

And then there’s the wildlife, including shots of the extremely rare Jemez Mountain salamander and Goat Peak pika, both natives of the area and being considered for protection under the Endangered Species Act.

In both cases those conducting research on these animals led Grabowska’s photographers to sites where they could capture images for the film, he said.

But in other cases it was a “tremendous investment of time” and the guidance of Bandelier Ranger and Wildlife Photographer Sally King, which led to the filming of bear, elk, a rattlesnake and tarantula, an owl and Abert’s squirrel and various birds and other wildlife, all of which make for captivating viewing. 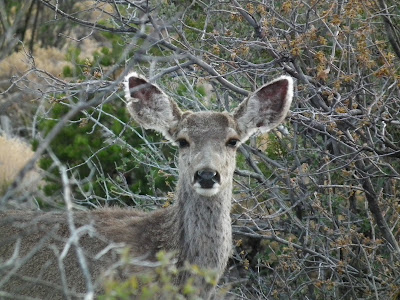 Grabowska, who works out of the National Park Service’s media office at Harpers Ferry Center, West Virginia, says he loves coming here to work on projects.

“I love everything about New Mexico -- the cultural diversity, the high desert landscape, the mountains, the rich history, the huge sky, the far horizons -- and the food, especially the food,” he says. “I still remember the first time I had carne adobada, sheer bliss.”


Grabowska, a native of South Dakota, says he misses the distant horizons the West has to offer and hopes to return for good some day.

“I've been visiting New Mexico for 25 years. My wife and I honeymooned in the Sangres and we've been coming back ever since,” he says. “I plan to live there some day.”

Grabowska, 50, has also produced the acclaimed film “Remembered Earth” about the peoples, culture and environment of the Four Corners region of New Mexico that is frequently featured on PBS and can been seen and purchased on DVD at the Northwest New Mexico Visitors Center in Grants.

Grabowska’s other New Mexico film, “Breath of Life,” is an interpretation of the cultural clash between the Pueblo Indians and Colonial Spaniards at the Salinas Pueblo Missions. It too has been aired on local PBS stations and can been seen and purchased on DVD at the National Park Service’s visitor center in Mountainair.

The long version of Grabowska’s new film about Bandelier and the surrounding region is destined for showing on PBS later this summer and is entitled ‘Sky Island”.

“The PBS version, to be broadcast in July, is aimed at a national audience, most of whom have not been to Bandelier and know little about it,” Grabowska says. “’Sky Island’ takes a broader view of the Jemez Mountain ecosystem, from the Rio Grande rift up to the Pajarito Plateau, then continuing uphill into the mixed conifer forest and topping out on the peaks. It also addresses anthropogenic climate change directly since the Jemez are the epicenter of dramatic climate change effects in New Mexico.”

The shorter version visitors to Bandelier see on the monument’s new 9-foot tall, 14-foot wide, big screen is entitled “This Place Knows Us.”

“The film in the visitor center is more Bandelier-centric and with a stronger Puebloan emphasis since the viewer will be seeing it right in Frijoles Canyon, surrounded by the canyon walls and the pueblos where the Ancestral Puebloans lived,” Grabowska says.

The visitor center film features narration by Meryl Streep and Dr. Dave Warren from Santa Clara Pueblo, a former director of the Smithsonian's National Museum of the American Indian who has a personal connection to Bandelier, Grabowska says.

Longtime monument employee, Chris Judson, says the film dovetails nicely with the new exhibits on display in the museum since recent upgrades to the visitor center.

Visitors will find excellent examples of local Indian art and pottery, both past and present, interpretive historical displays and other information about the Pueblo Indians who once lived at Bandelier.

This was done in conjunction with the local pueblos affiliated with the monument including Santa Clara, San Ildefonso, Cochiti, Kewa (Santo Domingo) San Felipe and Zuni.

All of these pueblos can trace their ancestral lineage to Bandelier and play an important role in the monument’s mission, Judson says.

But perhaps one of the most important changes that came with the recent rehabilitation of the monument’s historic visitor’s center is for mobility impaired guests.

The museum, theatre and restrooms have been upgraded along with other access improvements to allow these visitors to enjoy a great deal more of what the monument has to offer, Judson says.

If You Go: From Santa Fe take US 84/285 north to Pojoaque and take the Los Alamos turnoff on State Road 502. Proceed west to the White Rock turnoff on State Road 4 and follow to the Bandelier entrance. Cost is $12 and is good for seven days. Camping is available on the rim above the canyon in developed sites. For more info see Bandelier’s site at http://www.nps.gov/band/index.htm.