And it would appear most anglers are thrilled with the results.

“It’s like a whole new river,” exclaimed Andy Avery, 41, of Placitas after spending a mild, mid-winter’s day fishing the world renowned river below Navajo Dam in northwestern New Mexico. “I’d like to shake the hand of whoever’s responsible for all this.”

Avery could start with state Department of Game and Fish Biologist, Marc Wethington, 48, who has been stationed on the river since joining the agency back in 1995 and has overseen all the improvements.

Wethington, a 1994 graduate of Highlands University, has administered four different projects in the last six years designed to improve fish habitat and angler satisfaction over about five miles of the famous fishery.

“And it’s been very worthwhile judging from the amount of positive feedback we’ve been getting from the angling public,” says Wethington, who grew up in nearby Waterflow and fished the river himself as a kid.

The latest phase of the improvement projects in the Braids area just above Texas Hole has produced such good results that even critics who at one time opposed the projects are now singing its praises.

“On first assessment, I would say this has the potential of real improvement for that part of the fishery and job well done,” wrote Andreas Novak of Farmington who frequently posts comments about the river in Mike Mora’s online chat room dedicated to the San Juan.

Just a few years earlier Novak was writing on the same forum that the department’s improvement projects were “a huge waste of time and money” and wouldn’t make “a bit of difference” to the river.”

What a difference a few tons of well placed boulders, some downed tree trunks and over 20 new fishing holes carved into the riverbed can make.

“It’s really been rewarding to see this kind of response,” Wethington says.

The latest improvements were made this past winter to the Braids area below the dam where fishing was marginal due to shallow water that coursed through a maze of islands.

So a diversion was constructed to direct more flow into the Braids area to increase the water’s depth and velocity. 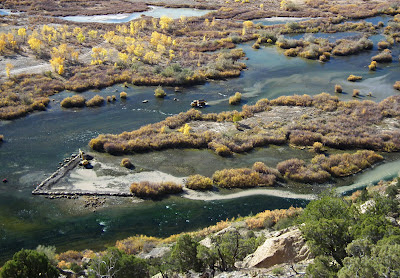 Then some side channels were blocked off to maximize the effect and lastly dozens of deep holes were carved out of the bedrock to provide new fish habitat.

Shortly after the Braids project work was completed and the area opened to fishing Wethington inspected the area and consulted with anglers.

Most everyone expressed happiness with the work and some noted the intimacy that the new fishing holes hidden deep among the islands provided.

The area has since been reseeded with native plants and shrubs and is expected look completely natural within just a few seasons, Wethington says.

And within days of the project’s completion, trout were already moving back into the Braids, making it their home, much to the delight of anglers.

One of the outcomes of the Braids projects has been its popularity and what that has done to other areas of the river.

In the weeks after the Braids were reopened anglers found they could have other stretches of the river to themselves as everyone was apparently fishing the Braids area.

“The results have been beyond our wildest expectations,” says Larry Johnson of the San Juan River Guides Association. “Everyone’s just been raving about it.”

The $350,000 project cost was funded in part with $250,000 earmarked by former Governor Bill Richardson and another $100,000 from federal sport fish restoration funds.

Those federal funds are generated through excise taxes on fishing tackle, motor boat fuel and other sporting goods, says Mike Sloane, Chief of the Fisheries Division for NMDGF.

Wethington says his boss, Sloan, and state game Commissioner, Jim McClintic, are the “unsung heroes” of the San Juan River projects, providing vital political support and funding to see them through.

“It wouldn’t have happened without them,” Wethington says of the two men.

Perhaps unheralded but as important as any improvement to the river was the construction of a large spilling basin and catchment dam at the base of Rex Smith Wash during the Braids project.

The dam is designed to catch storm runoff carrying silt and sediment and keep it from flowing directly into the river at the Braids area. 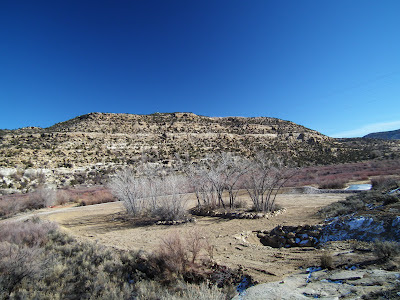 The massive catchment dam and spilling basin is designed to direct overflow from the retention pond upstream into a heavily vegetated, marsh area where silt and sediment can settle and the water filter out before making its way to the river, Wethington said.

In previous years heavy flows from the wash were responsible for silting up the popular Kiddie and Texas holes and negatively impacting fish habitat there and further downstream.

At one time runoff from the wash used to flow harmlessly out across what is now the Texas Hole parking lot which was constructed by State Parks to accommodate anglers who pay a $5 a day user’s fee.

But after flooding threatened vault toilets installed there, State Parks elected to construct a dirt berm along the edge of the parking lot to channel the wash’s flow directly into the river.

The catchment dam should now alleviate that problem and end a decade long effort to address it, Wethington said.

The Braids project is the just latest in a series of habitat improvement projects designed to enhance conditions for trout and anglers alike while also serving as a hedge against the possibility of low water flows in the future.

Need for the projects became apparent after flows from Navajo Reservoir which feeds the river were reduced during the 1990s to accommodate the downstream needs of endangered native fish.

The lower flows contributed to a buildup of silt and sediment and reduced prime fish habitat which negatively impacted the fishery and caused alarm and outrage among some anglers.

The department formulated a strategy to address the lower flows and the possibility of more in the future due to an expected increase in water demands.

The department also wanted to reduce crowding on heavily fished sections of the river by improving angling in less frequented areas.

The department, working in conjunction with the Bureau of Land Management’s Wildlife Biologist John Hansen, installed their first habitat improvement project during the winter of 2005 with a set of rock structures in a barren stretch of river below Simon Canyon.

The following winter more rock structures were installed in the same area to complete work on that section of the river. 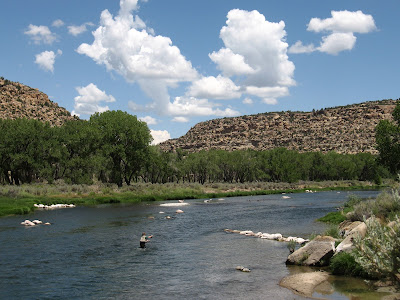 Much of that initial work was done with limited funds and contributions of manpower and equipment from the oil and gas industry.

The boulders were expected to keep the river water churning which helps scour the streambed and keep silt and sediment suspended to be carried further downstream.

And today what was once a long, slow stretch of sandy streambed holding few if any trout has become one of the most popular sections of the river with plenty of trout to be caught.

“We’re really seeing dividends from that project,” Johnson of the guides association says.

Fishing guides love this stretch of river now because it provides their client’s a last chance to catch fish before their trip typically ends just around the corner at the Gravel Pit take out.

The work then continued with habitat improvements being installed at Cottonwood Campground where the waters are heavily stocked with trout and anglers can fish with bait and harvest the bag limit.

“We’ve been seeing great results all over the river from these projects,” says Brian Wagner of the San Juan Flyfishing Federation. “Hopefully there’s more to come.”

The federal Bureau of Land Management (BLM) recently added some fish habitat improvements of their own at the Trucha Rosilla day use area just below the town of Navajo Dam.

And they’ve had crews out cutting back invasive weeds and shrubs along the river’s edge to help reduce water absorption.

Wethington notes that many have contributed to improvements on the San Juan River including the Bureau of Land Management, the Bureau of Reclamation, the Army Corp of Engineers and the New Mexico Environment Department and Navajo Lake State Park.

Many within the local angling industry also participated including Ray Johnston of Float and Fish Fly Shop, the San Juan Fly Fishing Federation, the San Juan River Guides Association and many individual fishing guides and anglers.

And the oil and gas industry also contributed to the effort by providing manpower, funding and equipment including Devon Energy, Williams and ConocoPhillips, Golden Equipment, Volvo International, Aztec Excavation, Adobe Construction of Bloomfield,
Other recent changes on the river, designed to improve fishing conditions, have included a restriction to the maximum use of two flies per rig while fishing to help reduce trout mortality.

And the trophy trout rule which had allowed anglers to keep a single trout over 20-inches has been revoked, effectively making the river catch and release only for the first four miles below the dam.

And now the department has Wethington working on plans to install habitat improvements in back channels including the one that flows from below Texas Hole to the Lower Flats and the other one that runs from the Lower Flats to just below Baetis Bend.

Wethington expects these improvements would provide anglers seeking solitude a greater opportunity to catch more fish while evading the many other anglers that the popular river attracts.

And while these habitat improvements have been generally been well received, some have questioned the effect they have had on the aesthetics of the river.

Steve Miller, a longtime river rafter and fly fisherman from Embudo, NM, wrote on his blog at http://believesteve.wordpress.com/  in November 2011 that after visiting the river during construction he took exception to the “amusement park” like atmosphere that the improvements had created.

“Despite the fact that they (the projects) indisputably increase the number of fish in the river, I don’t enjoy fishing a river that has been so altered,” Miller wrote.” For me, it largely negates the naturalness of the setting, and makes me feel like I’m fishing in an amusement park.”
The San Juan River is New Mexico’s premier trout fishing destination bringing in an estimated $30 to $40 million annually to the state’s economy.

The river boasts an estimated 70,000 trout inhabiting the first four miles of river below Navajo Dam and angler survey results show the river sustains an average of 140 anglers a day who each catch just over a fish an hour averaging 16-inches in length.

About 6 percent of anglers report having caught a trout over 20 inches long, according to angler survey results.

This story was commissioned by the New Mexico Department of Game and Fish for its own publication "New Mexico Wildlife" and has since been published in its Spring/Summer 2012 edition and can be seen in that format, online, at http://www.wildlife.state.nm.us/publications/documents/NM_Wildlife/archives/spring_2012.pdf